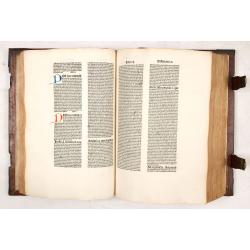 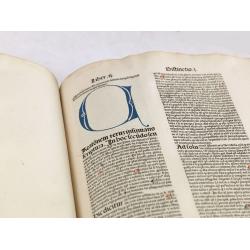 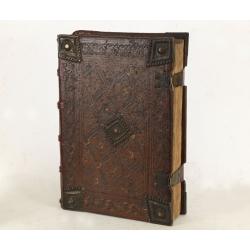 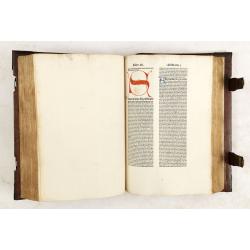 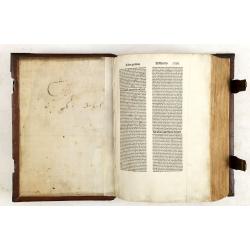 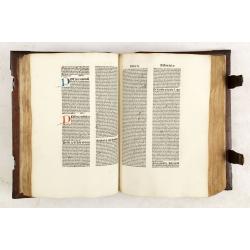 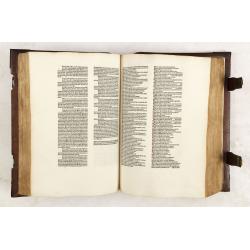 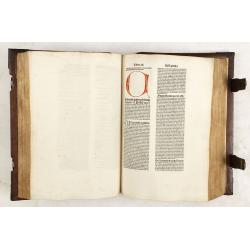 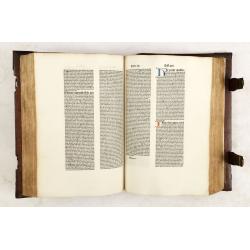 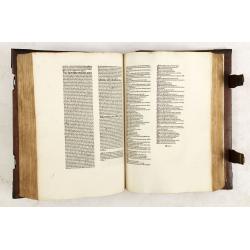 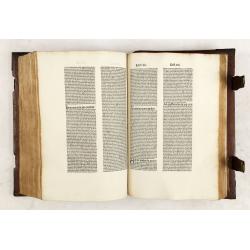 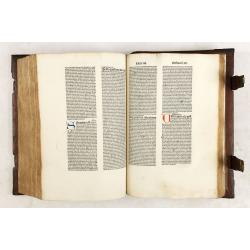 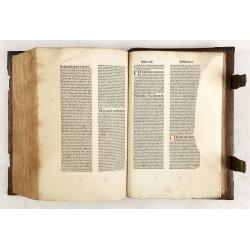 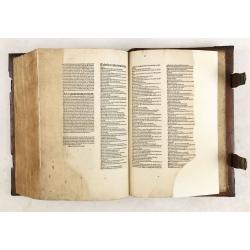 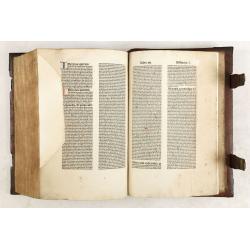 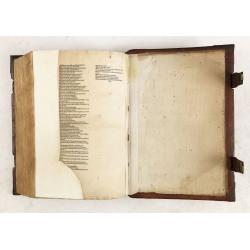 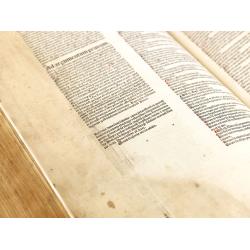 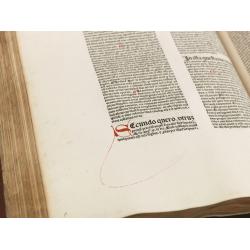 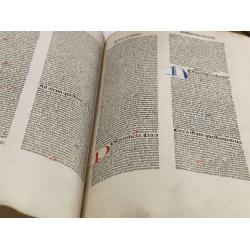 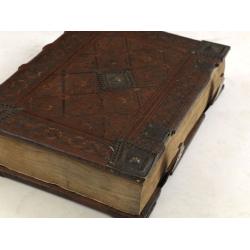 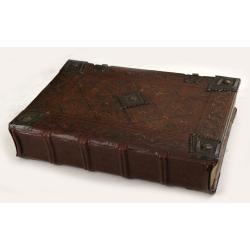 The second edition of the first work and third edition of the second, both printed in the same year by Koberger and frequently bound together. On extraordinarily Strong and Thick Paper. Double column, 60 lines in gothic type.  Rubricated throughout, with five 20-line initials with red pen-work decoration (at the beginning of the first work and each of the 4 parts in the second). Folio, 430 x 290 mm, contemporary German blind-tooled pigskin over beveled wooden boards with remnants of clasps, covers decorated with panel of intersecting diagonal double fillets filled in with Maria scroll, rosette, eagle, and stag tools.
Modern morocco spine and 1 replaced cornerpiece and catches, numerous small wormholes through front cover.
Nuremberg, Anton Koberger, [14]81. Four parts in one volume. (Part I) [28] (of [130]), colophon dated [14]81 ; (part II) [82], colophon dated 23 April [14]81 ; (part III) [58], colophon dated [14]81; (part IV) [137] (of [140]) leaves, including the 4 initial blanks, colophon dated 19 May [14]81. Lacks the first 102 pp. in first part and leaves 46 and 47 in part IV ;  margins of the antepenultimate and last page re-inforced.

Bound with his: Quaestiones in quattuor libros Sententiarum Petri Lombardi. Edited by Thomas Penketh and Bartholomaeus Bellatus.
Lacks the first 31 pp. in the first part, margins of the last 2 pages re-inforced. [130], [82], [58], [140] leaves, including the 4 initial blanks,

Wide-margined copy, generally quite clean internally. Second edition of the Quaestiones. Scotus' commentary on the Sentences of Peter Lombard, the standard textbook of Catholic theology during the Middle Ages, was his most important work.

The "Quodlibet" appeared in Padua in 1474 and in Venice in 1477. This is the first German edition of both works from the press of the most successful printer in that country. One of the most prominent names in the cultural history of the incunabular era.

By the 14th century, the scholastic technique had reached the height of its development, becoming at the same time more narrowly focused, a tendency that was evident in the commentaries of Scotus, in which problems raised by contemporary theological debate superseded concentration on the ancient books.
As the first theologian to limit the universal validity of logic by stating that the structure of this world represents only one aspect of God's power, which is bound by nothing but the divine will and the law of contradiction, Scotus brought scholasticism to a point only surpassed by William of Ockham.

The leaves have so much strength and thickness that they tend to stand straight up rather than fall over as you turn them, and the margins here are huge.
An unfortunately incomplete work, but of great decorative appeal. The margins are huge, clean white heavy paper with hundreds of decorative initials in red or blue pen and ink.
Printed by the master printer Koberger, who would print Schedel's Chronicle 12 years later!

The printer Anton Koberger (c. 1440/1445 - 3 October 1513) owned one of the largest publishing houses in Europe. Though Koberger began printing books in Nuremberg around 1470.
Anton Koberger was born to an established Nuremberg family of bakers and made his first appearance in 1464 on the Nuremberg list of citizens. In 1470 he married Ursula Ingram, and after her death, he remarried another member of the Nuremberg patriciate, Margarete Holzschuher, in 1491. In all, he fathered twenty-five children, of whom thirteen survived to adulthood.

In 1471, he ceased goldsmithing to become a printer and publisher. He quickly became the most successful publisher in Germany, absorbing his rivals over the years to become a large capitalist enterprise, with twenty-four presses in operation, printing numerous works simultaneously and employing at its height 100 workers: printers, typesetters, typefounders, illuminators, and the like.
Constantly improving his business prospects, he sent out traveling agents and established links with booksellers all over Western Europe, including Venice, Europe's other great center of printing, Milan, Paris, Lyon, Vienna, and Budapest. At the supply end, he obtained two paper mills.
Koberger printed over 200 titles of incunabula, including 15 different copies of the Latin Bible. His only business blunder was when he turned down Martin Luther’s request to become Luther’s publisher.
It is interesting to note Anton Koberger lived, respectively, five and eight houses down from Hartmann Schedel, Sebald Schreyer, and Michael Wohlgemut's workshop on the very same street. Koberger was the godfather of Albrecht Dürer, whose family also lived on the same street.
His printing house survived his death only until 1526, and the family continued as goldsmiths and jewelers.