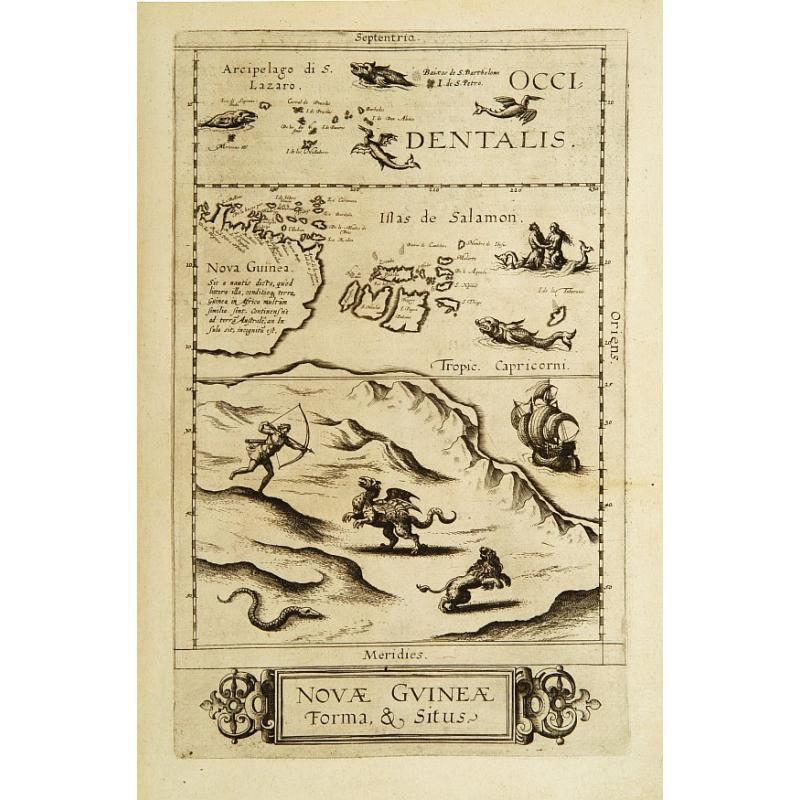 Extraordinarily rare map of the eastern part of Australia. The first separate map of this continent ever printed.
The map appeared in the 2nd edition of De Jode's rare Speculum Orbis Terrae, one of the rarest and most sought after of all late 16th Century Atlases. The map is one of two seminal maps covering the Pacific, the second showing the NW Coast of America. (See lot 17559 in this auction).
The map provides a relatively reasonable general depiction of the Queensland Coast. Recorded European maritime activity in this region in the 16th Century include Alvaro de Saavedra sent from Mexico by Fernand Cortez in 1527 who reputedly sailed 500 miles down the coast of Papuas during one of his attempts to return to Mexico. Another vessel under the command of the Spaniard Grijalva spent considerable time exploring the region in 1536. Due to a mutiny very few members of this expedition survived to give an account of what they found.
Portuguese exploration along the east coast of Australia in the 1520s are symptomatic of other probable European maritime activity along this coast.
These realities mixed with medieval creatures such as a gryphon, mermaids and other sea monsters indicate the antiquity from which this map was produced.
A very rare item, with a wonderful imprint.
Gerard De Jode was the great rival of Ortelius, both made a living out of selling maps, and it seems not always on good terms. It is probable that Ortelius was responsible for a delay in the publication of Gerard de Jode's Speculum. Gerard De Jode, 18 years older than Ortelius, owned many more copper-plates for maps than Ortelius had. Ortelius did not employ highly paid engravers as De Jode had done.
De Jode received the ecclesiastical imprimatur in 1573, but it was not until 1579 that the first copies of the Speculum were sold at Plantin's shop, and only very few copies were sold.
After the death of Gerard in 1591, the business was carried on by his widow and his son Cornelis, who re-issued the Speculum in 1593. °