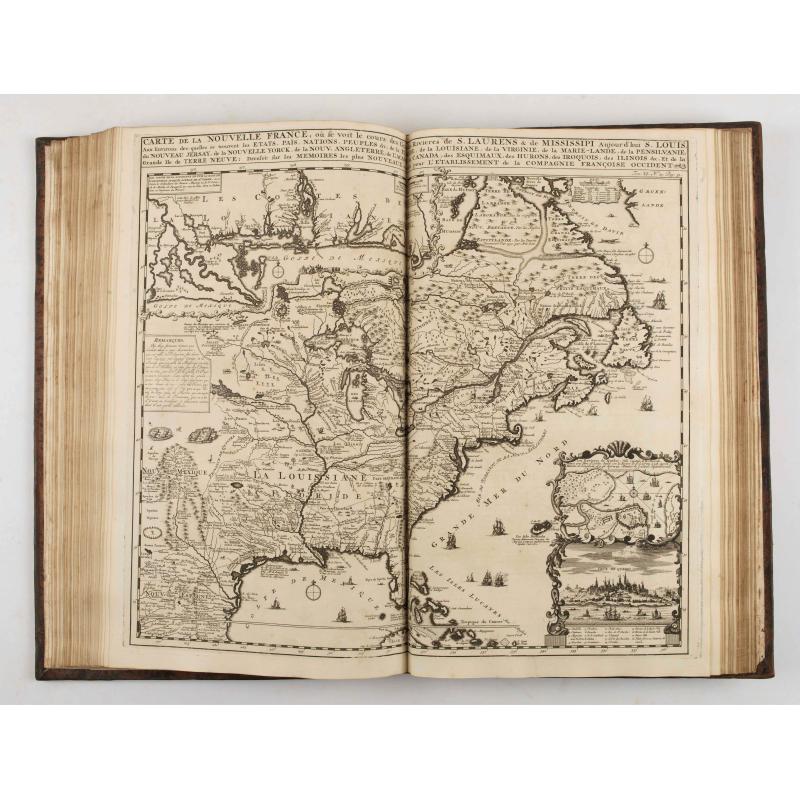 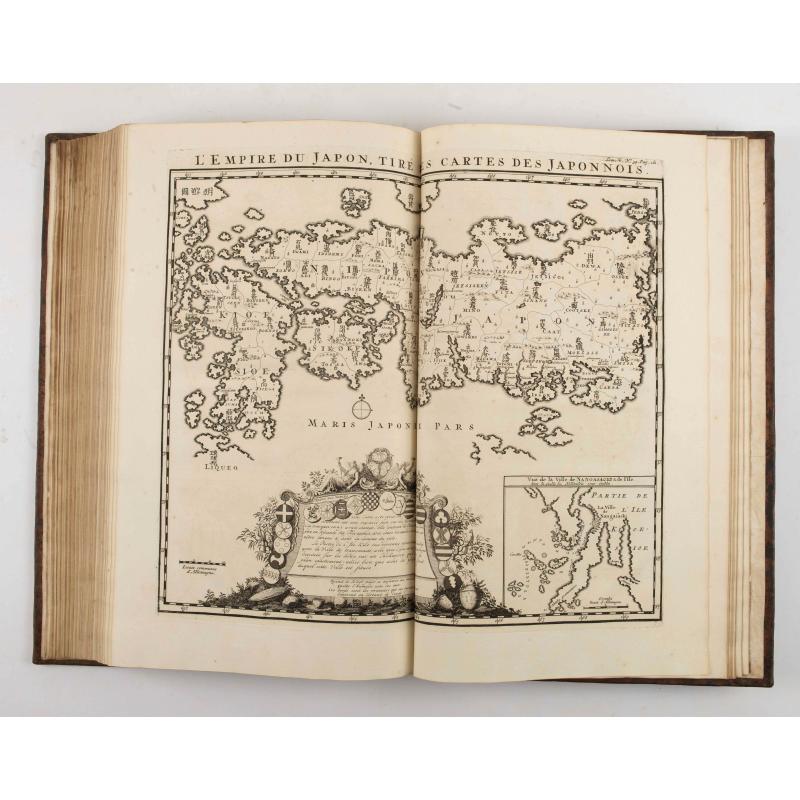 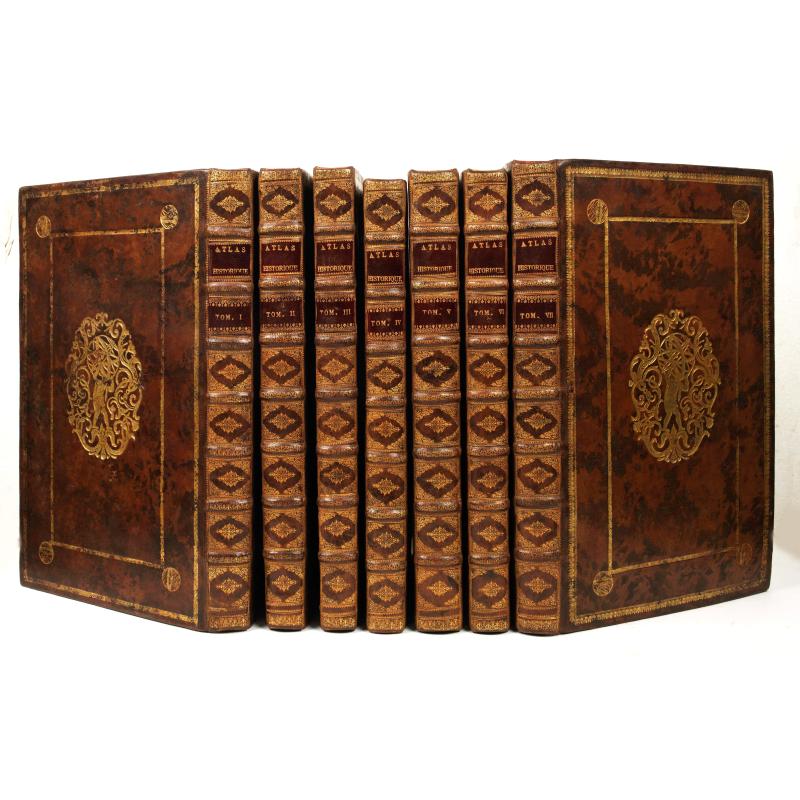 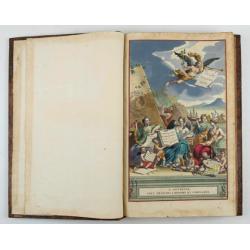 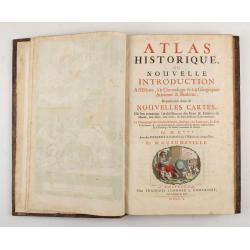 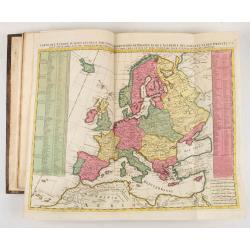 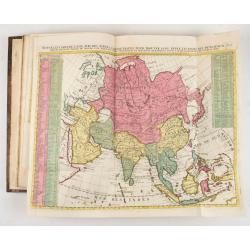 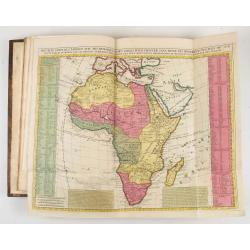 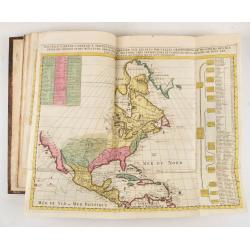 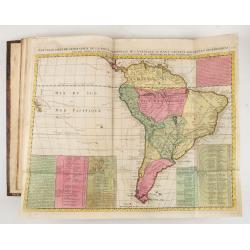 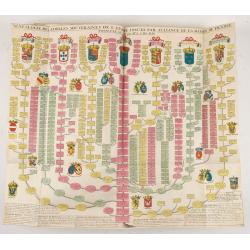 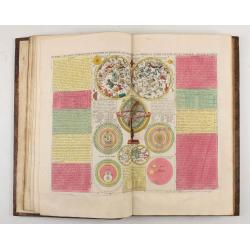 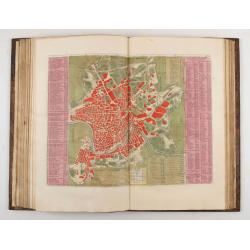 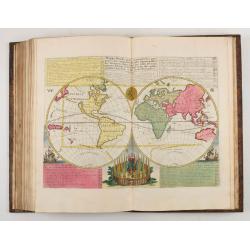 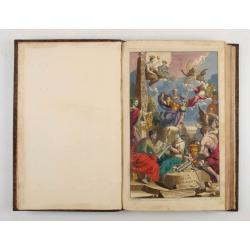 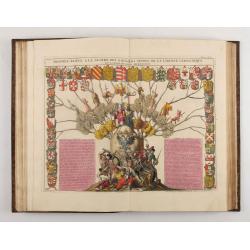 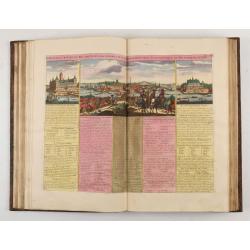 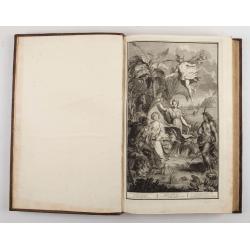 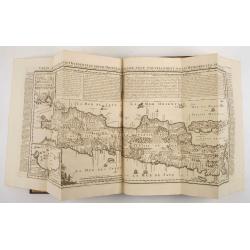 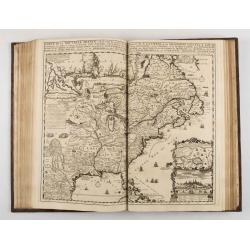 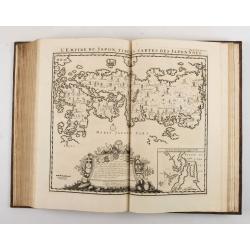 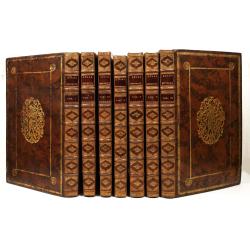 Volume 1 (1705) frontispiece and 46 plates.
Volume 2 (1708) frontispiece and 37 plates.
Volume 3 (1708) frontispiece and 30 plates.
Volume 4 (1714) frontispiece and 34 plates.
Volume 5 (1719) frontispiece and 57 plates.
Volume 6 (1719) 39 plates (counted 1 plate for the large America which 4 sheets have been completely joined)
Volume 7 (1720) frontispiece and 44 plates.
All volumes in first edition : vol. I by L’Honoré & Compagnie,1705 ; vol.II, III and IV by Les Frères Châtelain, 1708, 1708 and 1714 ; vol. V, VI and VII by L’Honoré & Châtelain. 1719, 1719 and 1720.
The first four volumes beautifully original colored, the last three volumes uncolored as they were later published.
Henri Abraham Chatelain, whose Atlas Historique was one of the most expansive encyclopedias of the age. First published in 1705, Chatelain's Atlas Historique was part of an immense seven-volume encyclopedia. Although the main focus of the text was geography, the work also included a wealth of historical, political, and genealogical information. The text was compiled by Nicholas Gueudeville and Garillon with a supplement by H.P. de Limiers and the maps were engraved by Chatelain, primarily after charts by Delisle. The atlas was published in Amsterdam between 1705 and 1721 and was later reissued by Zacharie Chatelain between 1732 and 1739.
Chatelain was a skilled artist and knew combining a wealth of historical and geographical information with delicate engraving and an uncomplicated composition. Groundbreaking for its time, this work included studies of geography, history, ethnology, heraldry, and cosmography. His maps with his elegant engraving are a superb example from the golden age of French mapmaking.
Amsterdam, Chez L’Honoré & Compagnie / chez Les Frères Châtelain / chez L’Honoré & Châtelain, 1705 - 1720. 7 volumes, folio, in total 5 frontispieces and 287 plates. Letterpress titles printed in red and black with engraved vignettes, one half-title. Volumes I, II, III and IV in splendid original colors, the last volumes published by L’Honoré & Châtelain are uncolored.

An ambitious and beautifully-presented work, the “Atlas Historique” was intended for the general public, fascinated in the early eighteenth century by the recently conquered colonies and the new discoveries. Distant countries, such as the Americas, Africa, the Middle East, Mongolia, China, Japan, Indonesia, etc., take an important place in this work.
In addition to the maps, many of which are based on Guillaume de l'Isle, the plates are after the best travel accounts of the period, such as those of Dapper, Chardin, de Bruyn, Le Hay and other.
Other sections deal with the history of the European countries, genealogy and heraldry.covers a wide range of subjects including genealogy, history, cosmography, topography, heraldry and chronology, costume of the world, all illustrated with numerous engraved maps, plates of local inhabitants and heraldic charts of the lineages of the ruling families of the time. The maps, prints and tables required to make up a complete set are listed in detail in each volume.

New scholarship has suggested the compiler of the atlas, who is identified on the title as "Mr. C***" not to be Henri Abraham Châtelain, but Zacharie Châtelain. (See Van Waning's article in the Journal of the International Map Collectors' Society for persuasive evidence of the latter's authorship.)
The images incorporated into the plates and tables are drawn from the best available contemporary sources, including the works of Dapper, Chardin, de Bruyn, Le Hay and others. Many of the maps are based on the work of Guillaume de l'Lisle.

Henri Abraham Chatelain (1684-1743), his father Zacharie Chatelain (d.1723) and Zacharie Junior (1690-1754), worked as a partnership publishing the Atlas Historique, Ou Nouvelle Introduction à L'Histoire under several different Chatelain imprints, depending on the Chatelain family partnerships at the time of publication. The atlas was published in seven volumes between 1705 and 1720, with a second edition appearing in 1732. The volumes I-IV with a Third edition and volume I with a final edition in 1739.
The maps were accompanied by information pertaining to cosmography, geography, history, chronology, genealogy, topography, heraldry, and costumes of the world. The maps in the Atlas Historique were mainly based on those of the French cartographer, Guillaume De L’Isle, but were presented by the Chatelains in an encyclopaedic form. The accompanying text is in French and often is printed in two columns on the page with maps and other illustrations interspersed. Each map and table is numbered consecutively within its volume and all maps bear the privileges of the States of Holland and West-Friesland.
The encyclopaedic nature of the work as a whole is reflected in this six frontispiece. The pages are the work of the celerated mr. Romeijn de Hooghe. and are engraved by J.Goeree, T.Schynyoet and P.Sluyter.

First volume concerns the ancient world, and contemporary Italy, France, and Spain. Eight of the double-page maps are of ancient political and geographical boundaries and locations, plus city views of Rome. Volume also includes genealogical and historical charts and tables. Two of the maps touch on North America: Plates 2 and 4, double-hemisphere world maps which include North America with California shown as an island.
Volume V
This volume is devoted to Asia and contains a very fine large folding map of Java and Japan after Reland, and a fine section on China and Japan, with maps after de l'Isle. The maps in this historical encyclopedia are of interest for the use of East Sea, the sea between Korea and Japan, here called "Mer Orientale ou Mer de Corée". A large portion is devoted the the History of China, and their religious aspects with mentioning the Missionary works by father Rizzi, etc.

Volume VI
Phillips records 35 maps of American interest, including twelve in vol.VI. The most important of the American interest maps is the "Carte tres curieuse de la Mer du Sud" [Goss North America 52; McLaughlin 190; Wagner 511] which depicts the history of discovery in the western hemisphere from the time of Columbus to the French explorations in North America in the late seventeenth century. Central to the detail is the large depiction of California as an island a somewhat outdated concept at the time of publication and a contrast to the geographically accurate (relatively) delineation of the Great Lakes and the Mississippi.
The Carte Tres Curieuse is also renowned for its illustrations of the New World; beavers are shown at work by Niagara Falls, a fishing factory is in operation in New England, and numerous views of New World cities are also included. Medallion portraits of New World explorers show Columbus, Vespucci, Magellan, Drake, La Salle and Dampier.
The example in the present set is a fine dark impression on four sheets joined to form a large folding sheet. (As usually a few tears on crossings of folds have been restored)