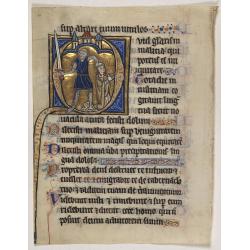 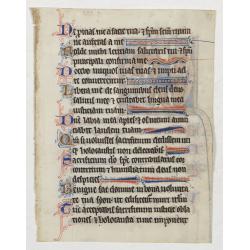 RECTO : A 8 line illuminated initial Q ("Quid gloriaris ..."), in burnished gold with penwork within the lay-out. Division at Psalm 51, historiated with Doeg Killing of the Priests of Nob (I Samuel 22), a subject which presumably, after 1170, reminded viewers of the martyrdom of Thomas Becket, especially when, as here, only one priest is depicted. Various fine decorative line-fillers in gold, red and blue.
VERSO : 9 Versal initials in burnished gold or blue accompanied by alternating blue or red penwork, one gold initial with penwork within the lay-out. Various fine decorative line-fillers in gold.
Since the end of the 1960s several folia from a Psalter, formerly in the collection of the late Esther Rosenbaum have surfaced. The present page undoubtedly belonged to this important 13th century Psalter, of which illuminated pages were sold a.o. for auction at Sotheby's, London (25 April 1983, lot 69, sold to Quaritch), also lot 14, Dec. 1991, lot 6 in Dec.1992, another was offered for sale at Maggs ( cat. 1340, No. 4).
Three other leaves were present in the exhibition on private prayerbooks in Cologne, Schnüttgen Museum, 1987, No. 8.
In a recent sale in London another leaf, fol. 193, was sold at Sotheby's, 2003, lot. 13.
The origin of the Psalter is here convincingly ascribed to England, rather than to Flanders, due to the inclusion of a scene from the life of St. Thomas Becket on one of the leaves sold at auction in 1991, the greater similarity with line-fillers found in two Psalters from Worcester (in Cambridge and Krivoklát Castle), the "Salvin Hours" ( London, British Lib.) and the Windmill Psalter (New York, Pierpont Morgan Lib.) further enhances an English origin.
Learn more about illuminated manuscripts [+]