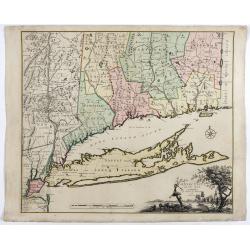 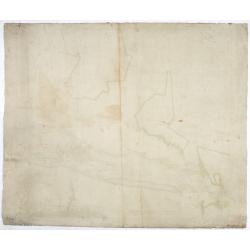 A nice example of this early map of the state of Connecticut with part of Rhode Island to the east, Long Island to the south, and New York to the east. Rivers, roads, towns, and churches are shown. Elevation is depicted using rows of peaks. The Housatonic River is identified as the Westerhoek or Hosatonick or Darby or Stratford River.
Counties are outlined in color. Rivers, roads, and towns in adjoining parts of New York, including Long Island, are shown. New York is identified as "State of New York."
The cartouche at lower right represents a village with houses and a church, cows, an old tree with a broken limb and a young vigorous tree.
of Connecticut and Long Island originally published in New Haven by Bernard Romans and later in Amsterdam. This map was one of four Romans maps parts of the American colonies to be re-engraved and published by the renowned Dutch firm of cartographers Covens and Mortier and Covens Jr. in 1780.
The engraver of the map is H. Klockhoff.
Bernard Romans (1741 - 1784) was born in Delft, Netherlands and learned mapmaking and surveying in England, before moving to the Colonies in 1757. He served on the American side during the Revolution and made several maps, including this one, at that time. Romans's bias is clearly evident in the fact that New York is identified as the State (not the Colony) of New York. All editions of this important map are extremely rare today.
The Covens & Mortier edition of Romans' map is the only surviving evidence of what was almost certainly the now lost second state of Romans' map of Connecticut, prior to the revisions in Litchfield County and New London County.
As such, the first state, which survives in a single copy at the John Carter Brown Library appears to be a proof state, pre-dating the inclusion of additional contour lines in the rivers, lakes and coastlines of Connecticut.
The Covens & Mortier edition is identical to the first state, except that it adds these contour lines.

Different states of the map

Romans 1777 map is  known in five examples.  Thompson identifies two states and surmises from the Covens & Mortier details the existence of an intermediate state between the two referenced below.

First State:  John Carter Brown Library. Apparently a proof state. The Lakes, Rivers and Coastlines of Connecticut are represented in a more simple outline fashion, without contour line.  However, it should be noted that the rivers are not noted with single lines, the widths of the rivers is unchanged in later states and only contour lines are added within. Westbury is erroneously shown south of Waterbury and Southbury is placed on the east side of the Naugatuck River.

Second State:  No known examples, but almost certainly the source for the Covens & Mortier map.

Third State (this map):  The Shepard River and the Pomperaug River are completely reworked north of the Housatonic River.   Westbury is now north of Waterbury and Southbury is now on the east side of the Naugatuck River.  The towns of Goshen and Westchester have been added (south of Lebanon).  Stony Brook in Suffield County and Fresh Water Brook in Enfield have been added, along with some ponds in East Haven and Southbury.

Buying in the Buy-or-Bid sale
To buy in the sale you must register with us. It is free, and we automatically update you about future auctions.
During the Buy-or-Bid sale you can buy or make an offer on 1500 - 2000 antique maps, town views, old master prints, decorative prints, atlases, posters and Medieval manuscripts.