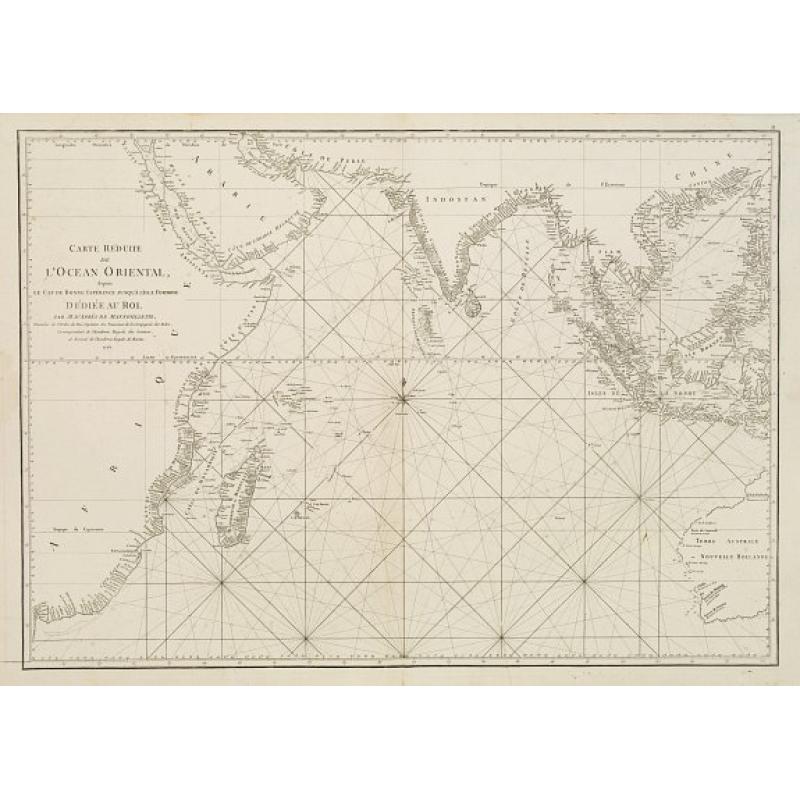 French chart showing the area of Cap Bonne -Espérance until Formosa (Taiwan). Including the western coast of Australia.
A ship track from South Africa directly to the East coast of Java has been drawn in. The return track from the north point of Sumatra to Ceylon, Madagascar to Isle de France, to South Africa.
Interestingly the position of an island south of Java "I.Mani" has been corrected by pen in brown ink.
Latitude and longitude scales, compass rose and system of rhumb lines, soundings near coast and in bay areas.
D' Après de Mannevillette (1707-1780) was a famous French sailor and hydrograph. During a voyage to China in 1728 he succeeded in correcting the latitudes of many places using new instruments. Back in France he devised a plan to correct and publish all the existing maps of the route to China: the Res Sea, the coasts of India, Malaya, the northern parts of Indonesia, Indochina and China.
When the first edition of his Atlas Le Neptune Oriental (containing only 22 charts) was published in 1745, it was regarded as a major achievement and a library indispensable to navigators. In 1672, d'Après was appointed director of an office established by the Compagnie des Indes for the publication of charts.

More about the life of D'Après De Mannevillette [+]