Lot #: 13055
Sold for $560.
Subscribe to be notified if similar examples become available. 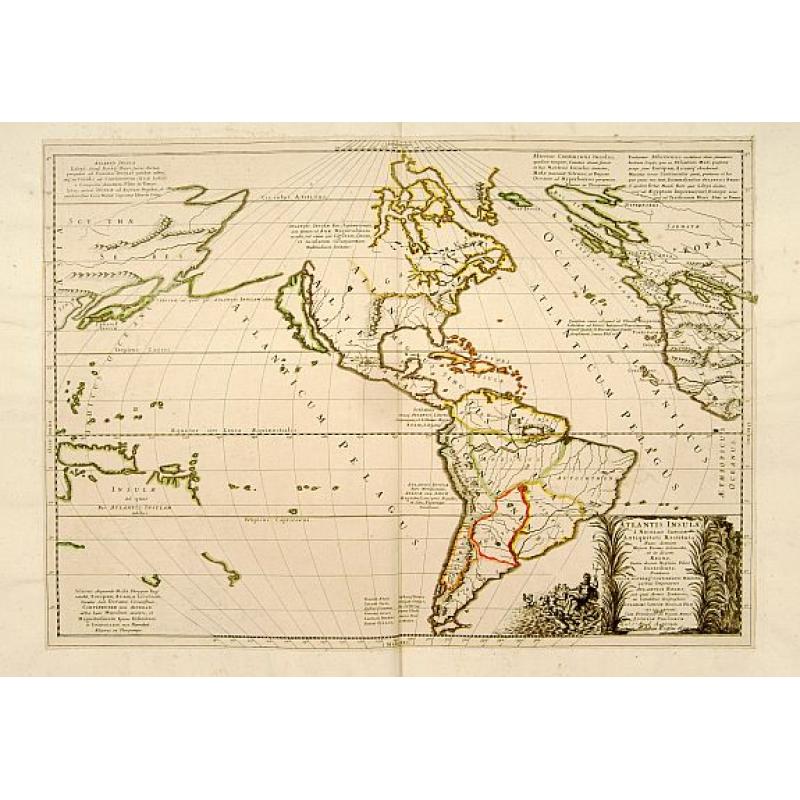 Third state (of five) of the unusual map that purports to show the earth about 200,000 years ago before its settlement by humans. The god Neptune had divided up the land masses among his ten sons.
The basic map had been the work of the father Nicolas Sanson (1600-1667) and the names to parts of the Western Hemisphere after these demigods being the work of his son Guillaume who died in 1703.
Fascination with the Atlantis legend caused the map to sell well from between 1669 and 1741. Interest and scholarly respectability in the lost continent or the Atlantian empire continued unabated into the late 19th and 20th Centuries.
Thule island is shown, believed source of Nordic races. The triumphant success of Heinrich Schliemann as an archaeologist, success that earned him wealth and lasting fame, caused many to accept as fact ancient legends. Schliemann had taken Homer's Iliad and Odyssey and their accounts of the Trojan Wars to be literal truth. He then discovered ancient Troy in Asia Minor.
Russian adventuress and telepath Madame Helena Petrovna Blavatsky took up and defined the Atlantian concept, (Atlantis was first described by Plato about 400 B.C.), and Austrian Guido von List championed its racial implications. Englishman Sir James Churchward contributed the land or island of Mu in the Indian Ocean.
While having now lost scholarly credibility, there are still those who defend the existence of Atlantis. They think it now to have been an island in a lake in Bolivia. There are also some who believe such theories as Hollow Earth, Ancient Astronauts, and even Hoerbiger's World Ice Theory. While these may be fanciful, some mainstream archaeologists are accepting as fact the writings of the Greek historian Herodotus.
Basic cartography of the mid-Seventeenth Century with California as an island. The map appeals to collectors because the Great Lakes are shown as a thematic version of the prototype Sanson first published in 1650.
Nicolas Sanson was to bring about the rise of French cartography, although the fierce competition of the Dutch would last until the end of the century. His success was partly owing to the partnership with the publisher Pierre Mariette. In 1644 the latter had purchased the business of Melchior Tavernier, and helped Sanson with financial support in producing the maps. In 1657 Pierre Marriette died, however his son, also named Pierre, co-published the following years.