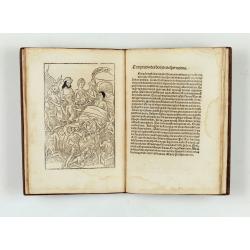 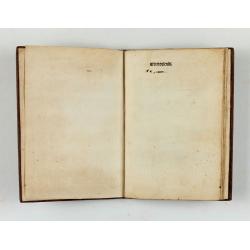 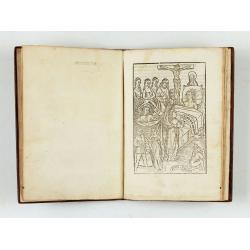 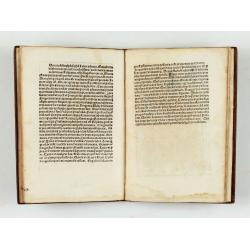 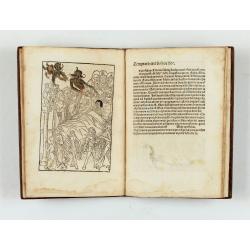 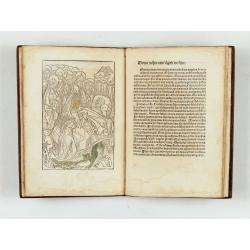 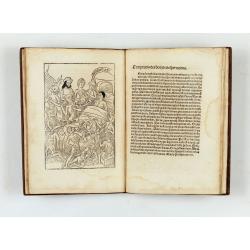 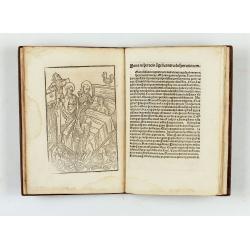 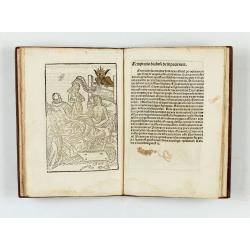 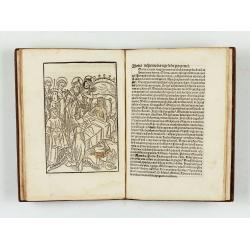 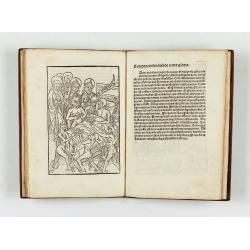 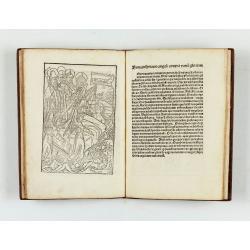 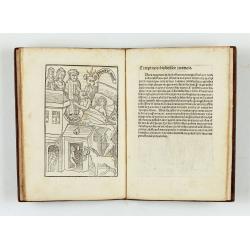 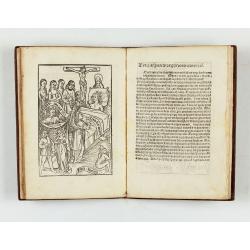 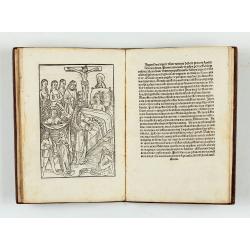 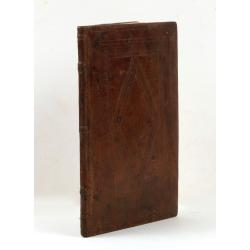 The Ars moriendi or Art of Dying is one of the great themes of medieval life, and it founds its most poetic expression in a series of wonderful images created around 1460 in the Netherlands. Thar series, which probably originated as drawings from the school of Rogier van der Weyden, now lost, served as models for a famous set of engravings by the Master E. S., for the several Blockbook editions, and for typographic editions illustrated by woodcuts, which were produced throughout Europe in the late 15th and early 16th centuries.

French edition published in Lyon by Johann Siber, c. 1495. The complete set consists of twelve full-page woodcuts, each about 15 x 10 mm ; (eleven of these repeat the E. S. and blockbook prints, while the remaining three are drawn from other sources, but are rendered so completely homogeneous with the others in the anonymous artist’s treatment that they have become a wholly integral part.)

In this series of fascinating images, demons and angels fight over the soul of the dying man in bed under the gaze of Christ, the Virgin and the saints. The temptations of the devils and the arguments of the angels are summarized in sentences in gothic letters engraved directly into the wood within phylacteries. In the last plate, the body is inert and Christ receives the soul finally delivered, represented in the form of a child.

A true success of medieval devotional literature, the Ars moriendi (Art of Dying Well), was widely distributed in manuscript form before being printed many times in the 15th and 16th centuries. It owes much of its success to the extraordinary illustrations with which it is adorned.
The Ars moriendi was first published in Germany, first in a long version in 1415, entitled Tractatus artis bene moriendi, commissioned from an anonymous Dominican monk, presumably at the Council of Constance, and then in a shorter version in 1450 in the Netherlands. The second chapter of the early text describes five temptations that confront man in the face of death and shows him how to resist them. The 1450 version is essentially an adaptation of this second chapter.

Despite the many editions and printings in various languages c. 1475-1520, all of the early editions of the Ars moriendi are of great rarity.
6 copies/fragments in public institutions : Città del Vaticano Bvat. Kraków Bczartoryski (def.). London BL. Metz Bmun. München SB. Paris BN