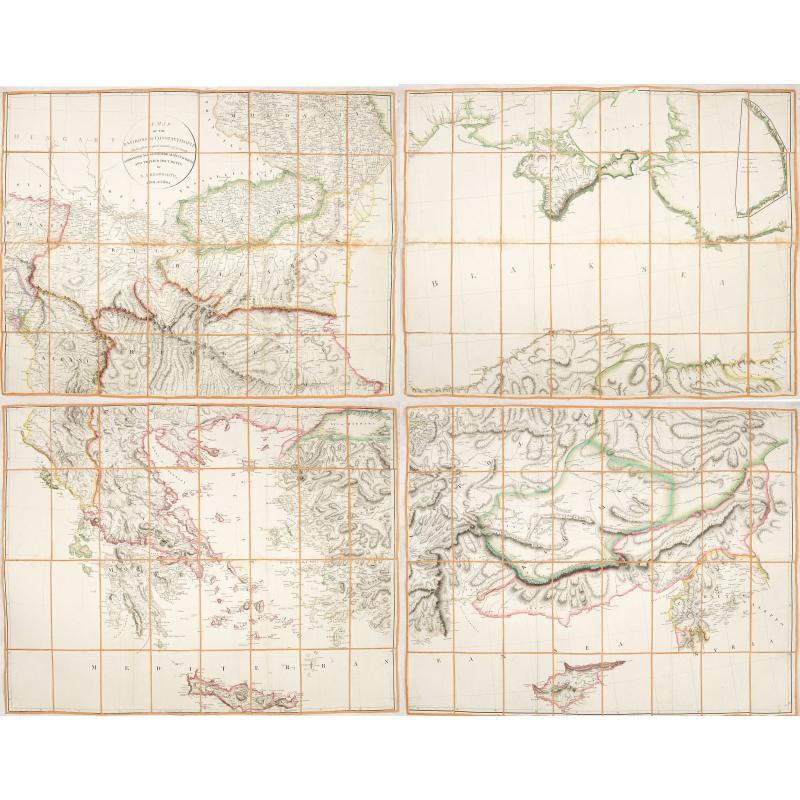 Arrowsmith’s large and detailed map of the Ottoman Empire and the Black Sea, with Cyprus, Crete and the Greek Islands in the Mediterranean Sea, Albania, Bosnia and Herzegovina.
By the beginning of the nineteenth century the Ottoman Empire had fallen some way from the lofty heights of 1683, when it had threatened the gates of Vienna. The Russo-Turkish wars of the eighteenth century – most notably that of 1768-1774 – weakened the Empire considerably, and by the time of the present map's publication many of the Great European powers believed her break-up to be imminent.
The ramifications of the Empire’s gradual decline became known as the Eastern Question, with Britain, Austria, France, and Russia increasingly using the Empire as a pawn in their diplomatic games. At the time of the production of the map – during the Napoleonic War - Britain was increasingly concerned by both Russian and French involvement in Ottoman affairs.
She feared not only Russian designs on Constantinople and her wish for a Mediterranean port, but also that control by either power of the Eastern Mediterranean would lead to British interests - most notably in India – being severely compromised. (Lyon and Turnbull).
Aaron Arrowsmith (1750-1833) is described by Tooley as easily the foremost cartographer of his time , who issued about 200 maps: most of which were large scaled like this one. He was rewarded in becoming Hydrographer to the Prince of Wales (c.1810) and later to His Majesty (1820). His sons continued the business.
Although he received little formal education it is believed that he was taught some mathematical instruction by William Emerson, an author of several books on the application of mathematics to the area of cartography. Around 1770, Arrowsmith moved to London to seek employment. It is believed that he worked for William Faden before joining John Cary Sr. in the early 1780s. There he provided the measurements for John Cary's early publication detailing the roads from London to Falmouth, his first signed work. Arrowsmith set up on his own n 1790 and over the next thirty years produced some of the most beautiful and elegant maps of the era.
Aaron Arrowsmith (1750-1823) was the finest cartographer of his generation. His son took over the business.