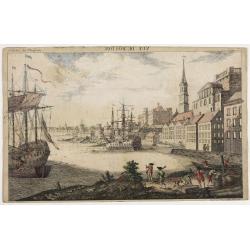 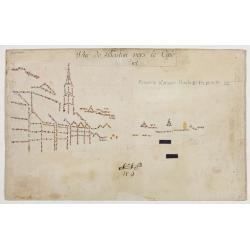 A view of the port of Boston, the center of New England shipping in the colonial period. The closing of the port after the Boston Tea Party led to the calling of the First Continental Congress.
Margins are cut and transformed for use in a "rarekiek." The hand-colored engraving is much perforated, and the windows are cut out; a thin transparent paper is mounted at the back and tipped with color over the perforations. When looking at the plate with the light behind it, it is illuminated in all colors.
In the eighteenth and nineteenth centuries, many popular specialty establishments in Paris, Augsburg, and London produced optical viewing devices and special engravings to be viewed through them. In the 18th century, a type of perspective print came into existence, whose exaggerated converging lines were intended to produce the optical illusion of deep recession without the benefit of lenses and mirrors.
The viewing devices for which these perspective prints were produced consisted of a simple box or frame with a peephole. Later, people peered through lenses, and finally, a mirror was incorporated that required the use of reversed or mirror-image pictures.
This print is prepared to view with the aid of an illumination box.
Read more about optical prints. [+]


Reference: LOC, The American Revolution in Drawings and Prints, 519.