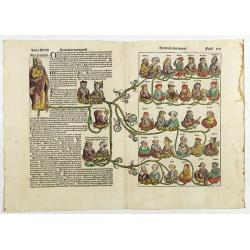 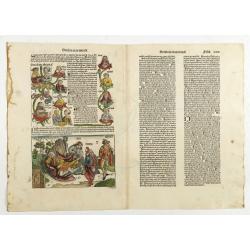 Showing the lineage of Noah through Ham on two pages. It is the first branch of the Generations of Noah illustrated in the Chronicle and occupies a good portion of Folios XIV verso and XV recto, to the exclusion of all text on the latter. None of the portraits in this composite are given personal or national characteristics, and even the picturesque giant hunter Nimrod carries none of the accessories of the chase.
On verso, a large woodcut showing Noah planted a vineyard (140 x 220mm.), and after he drank of the wine he became drunk and lay uncovered in his tent. Now when Ham saw the nakedness of his father, he told his two brothers about it.

Page from the richest illustrated Incurable, the famous: Nuremberg Chronicle, published the year that Columbus returned to Europe after discovering America.
The woodblock cutters were Michael Wolgemut, the well-known teacher of Albrecht Dürer, and his stepson Wilhelm Pleydenwurff. Wohlgemut was Albrecht Dürer's tutor between 1486-90 and recent scholarship has shown, Albrecht Dürer may also have collaborated since some of the cuts bear a remarkably close resemblance to the Apocalypse illustrations.
The printing was carried out under the supervision of the great scholar-printer Anton Koberger, whose printing were famous throughout Europe
An opportunity to acquire a 15th-century book illustration by named artists.!

Read more about the Liber chronicarum or Nuremberg Chronicle. [+]