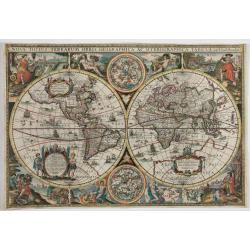 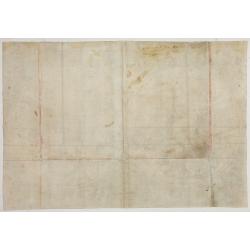 RARE AND STRIKINGLY BEAUTIFUL WORLD MAP "Nova Totius Terrarum Orbis Geographica ac Hydrographica Tabula auct. Iud. Hondio." Published in Paris by Jacob Honervogt, here with his address and dated 1625 right below the cartouch in the eastern hemisphere.
Shirley states: "Examples of the map are rare, and I have only seen one with the date 1625 and two of a later state by Jollain dated 1655".
This double hemisphere map is based on Jodocus Hondius' world map of 1617. But unlike Hondius' 1617 map (but following his later one), Honervogt shows a zodiacal line, curving to the south of the equator on the left (western) hemisphere and to the north of the equator on the right (eastern) hemisphere.

The map by J.Hondius was the first to show Le Maire's Straits and the islands in the Pacific discovered by Jacob Le Maire and his explorations in New Guinea. In North America, Hondius' map was also one of the earliest to delineate Hudson's Bay, making special reference to Henry Hudson and the Dutch and English expeditions there up to 1612.
Hondius also extends the full course of the St. Lawrence river, which now curiously runs across the continent, terminating in a large lake. Decoratively, the map is one of the most attractive.
The corners contain scenes of the four seasons. Ver or Spring shows gardeners tending a formal Dutch garden; Aestas or Summer is the time for sheep-shearing; Autumn brings the grape harvest in for wine-pressing; and in Hyems or Winter skaters revel on a frozen lake.
On either side of the north and south celestial hemispheres are recumbent figures representing the four elements: Terra, Aqua, Ignis and Aer.
The map in the cartouche on the right is dedicated to the English mathematicians Henry Briggs and Edward Wright.

Jacob (or Jacques) Honervogt (c.1583-c.1694), was a German-born engraver, who moved to Paris in about 1608. Honervogt's output of maps is extremely limited and only 16 maps, primarily based upon the work of other mapmakers are known to exist.
He established a map shop in Paris by 1624 and sometime after 1654, he took Gerard Jollain as a partner.  Jollain continued the business after Honervogt's death.