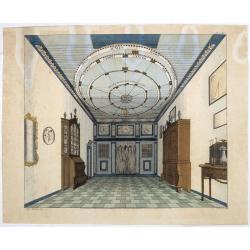 Very rare large engraving showing the interior with an astrological chart on the ceiling in the Eisinga Planetarium, the oldest working Planetarium in the world. Eisinga built it in his house in Franeker between the years 1774 and 1781. The interieur has an astrological chart on the ceiling, with dials indicating the movement of the Moon at the far end.

Eise Jeltes Eisinga (21 February 1744 – 27 August 1828) was a Dutch amateur astronomer who built the Eise Eisinga Planetarium in his house in Franeker. The orrery still exists and is the oldest functioning planetarium in the world.

On 8 May 1774 a conjunction of the moon and the planets Mercury, Venus, Mars, Jupiter was forecast to appear. Reverend Eelco Alta, from Boazum, Netherlands, published a book in which he interpreted this as a return to the state of the planets at the day of creation and a likely occasion for Armageddon. Alta predicted that the planets and the moon would collide, with the result that the earth would be pushed out of its orbit and burned by the sun.
Due to this prediction there was a lot of panic in Friesland.

The canonical view holds that Eisinga decided to build an orrery in his living room to prove that there was no reason for panic. He expected to finish it within six months and eventually finished it in 1781, seven years after he started. During the same year, Uranus was discovered, but there was no room for this planet on the ceiling of his living room, where the orrery was located.
However, recent research indicates that this chain of causality is dubious, not in the last place because Eijsinga appears to have commenced construction before the publication of Alta's book.
The construction of the orrery saved Eijsinga a lot of time, however, because he no longer needed to calculate the planets' respective positions by hand.