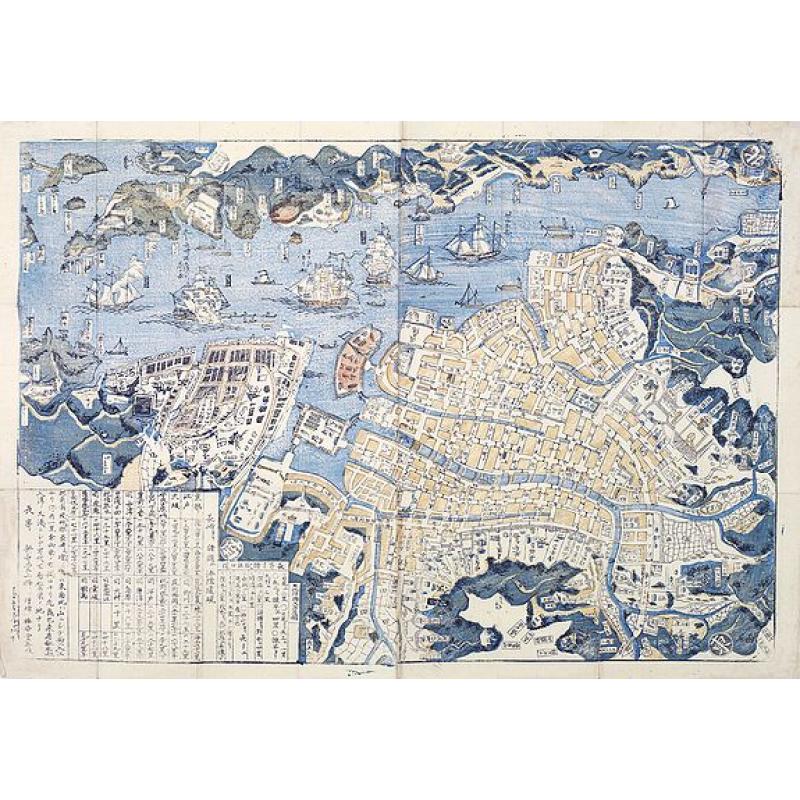 A bird's eye view of Nagasaki harbor. This is the reversed edition by Baikö-dö, originally published by Köju-do (1802).
In Nagasaki harbor the island Deshima (the V.O.C. trading post) with the Dutch flag and Dutch and Chinese vessels are shown.
Nagasaki was the port city of the Hizen Province (now Nagasaki Prefecture), and after 1570 began to prosper from the trade with Portugal. The government imposed a policy of seclusion on Japan in the early 17th century and since Nagasaki became the only port open to foreign trade. All the Dutch traders moved their commercial houses there in 1641.
The piece of fan-shaped land that juts out into Nagasaki Bay, attached to the shore by a bridge is the island of Dejima. Constructed in 1634 and first home of the Portuguese, later the Dutch traders. The map shows much activity of the foreign ships. In the bay are anchored Dutch ships and Chinese Junks. One Dutch ship, undertow by lines of tugboats, is firing its cannons in greeting.

All through the Edo period, Nagasaki along with Kyoto, Osaka and Edo was the scene of a flourishing publishing business in woodblock prints. Maps of Nagasaki were first published in the 1670s and from the 1770s on they came out in a constant stream.
Due to Dutch presence; Japan learned many aspects of the scientific and technological revolution occurring in Europe at that time, helping the country build up the beginnings of a theoretical and technological scientific base, which helps to explain Japan's success in its radical and speedy modernization following the opening of the country to foreign trade in 1854.
Rangaku, literally "Dutch Learning", and by extension "Western learning") is a body of knowledge developed by Japan through its contacts with the Dutch enclave of Dejima.