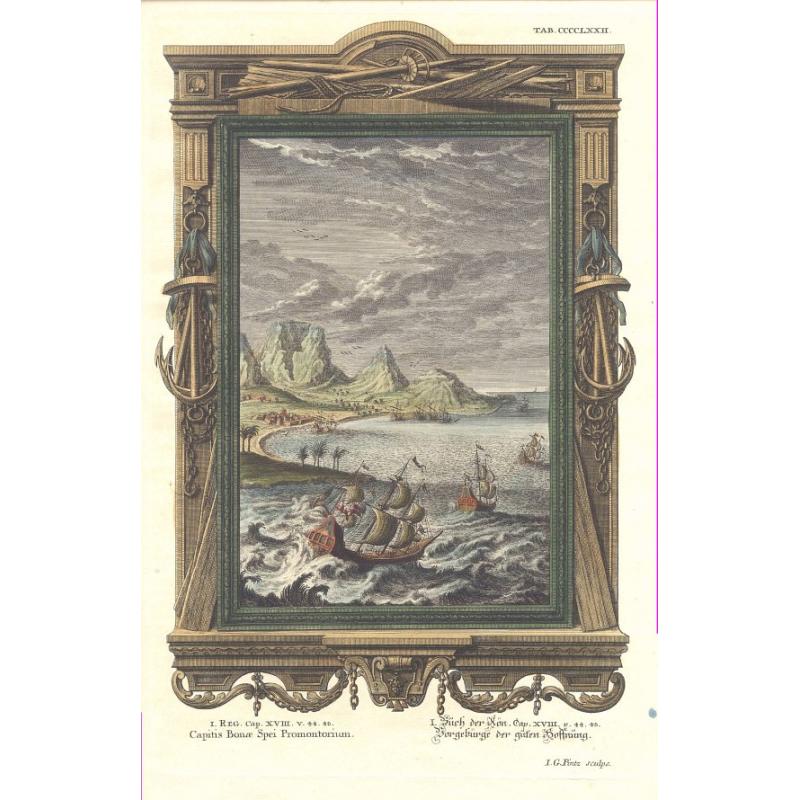 Title in Latin on left: Capitis Bonae Spei Promontorium (title also repeated in German on the right hand side).
A very rare and unusual print of the Cape of Good Hope and Table Bay.

Johann Jakob Scheuchzer's Kupfer-Bibel or Physica Sacra was published in four volumes during 1731-1735 in Augsburg und Ulm. Scheuchzer (1672 -1733) was a physician by training, with a strong interest in natural history and paleontology. Born in Switzerland, the son of a physician, he studied at University in Germany & later returned to Zurich to take a professorship in Mathematics. Like many scientists of the day, he considered the Old Testament a factual account of the history of the earth. In his extensive travels he amassed one of the largest fossil collections of the 18th century. In his masterpiece, Physica Sacra, he details his natural history theories at length, using references to the 1611 King James Bible.
The book was a sensation & was published simultaneously in Latin, German & French, each issue with exactly the same plates. The superbly powerful illustrations were by well known artists of the day including Corvinus, Sperling & Linz.

The large Cape of Good Hope plate, here in original color, was engraved by I.G. Pintz. While almost all views of the Cape during this period (e.g. Dapper, Valentyn and De Fer) views the bay and mountain straight on, this view is from an unusual angle, from the north-west. There is a huge contrast between the ship on the stormy sea and the ships in the calm waters of the bay. Two ships can be seen docked in front of the castle. The border is elaborate and continues the sea motive with emphasis on the danger of the "Cape of Storms", showing anchors, rope, a broken ship?s mast and driftwood.