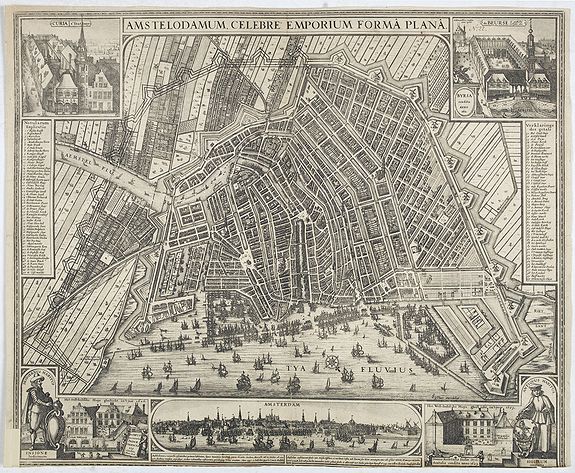 This state figures the fourth extension with the projected growth of the city added to the left half of the sheet, on the west side, the "Realeneiland" has been extended, above the image of the West India House the imprint of Visscher has been added, and, on the bastion right next to the St. Anthonispoort, a windmill has appeared.

This map appeared at the height of the Golden Age of the Dutch Empire, which was built on its dominance in international finance and the spice trade. Accordingly, the institutions highlighted in the corners of the map are not churches or monasteries but economic institutions such as the stock market, the headquarters of the Dutch West and East India Companies, and the old statehouse. Dare to go in Black. All early maps are printed in black and white and many were kept that way for a long time. A black and white map in an early and strong impression is a rarity nowadays being so many colored up recently!

Reference: Caert Thresoor 2019-2, a research study by Gijs Boink
Our website uses cookies. By continuing, you consent to the use of cookies on your device, unless you have disabled them from your browser.