The art of the decorative cartographic title-page

Since the 16th century many atlases of maps and, more widely, works of geography, cosmography, exploration and travel have been preceded by highly decorative title pages and/or frontispieces presenting their contents in symbolic form. Their aim is to attract the potential reader, first opening the book, by a visual expression of the contents of the work that is to follow. Similar visual messages may be imparted through the decorative cartouches of maps.

Typically, from the 1570s and over the next 300 years these printed engravings employ the language of allegory, fable, imagery and classical references to achieve this end.

The title page of the Theatrum Orbis Terrarum (1570)  shows five female figures as allegorical representatives of the continents, grouped around the title. The meaning of the title page is supplied by a poem headed Frontispicii explicatio written by Adolf van Meerkerke, lawyer, diplomat and alderman of Bruges, and was printed in the preliminary pages to the Theatrum.
The crowned and enthroned figure at the top is Europe, the empress of the world. The scepter in her right hand is an emblem of her authority and by means of the rudder held in her left hand, she steers the affairs of the world. The large cross signifies her Christian (Catholic) religion.

The figure at her right hand on the left of the title is Asia, richly dressed as an oriental princess with gems and precious stones. In her left hand is a thurible, full of fragrant incense, and the aromatic fumes issuing from it represent oriental mystery.
Africa, standing on the opposite pedestal, is black; burnt as a result of the impetuous chariot ride of Phacthon unable to control the horses of his sun-father Helios. Africa's head glows with her heat and in her hand, she holds a sprig of balsam whose unique provenance was thought to be Egypt.

The reclining figure ar the foot is America thought to be the first allegorical representation of that continent. She depicts south America with weapons and hunting equipment appropriate to her status as an Amazonian warrior. The severed head hints at the practices of cannibalism which are elaborated in lascivious detail in Van Meetkerke's poem.

Finally, there is the truncated bust of a fifth figure: she represents Magellanica, the terra incognita or virgin land as yet unexplored. The fires burning below her breast correspond to those sighted by Magellan and hence the lands named thereafter Tierra del Fuego and Magellanica.

According to Peter van der Krogt in Atlantes Neerlandici; Ortelius's engravers made three almost identical plates for the title page: plate A (1570), plate B (1579), and plate C, used for non-Latin editions beginning in 1572. 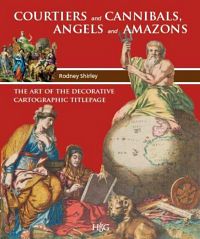 Courtiers and Cannibals
A highly recommended book written by Rodney Shirley has been published. This book aims to preserve and bring forward for wider appreciation the outstanding works of art that many engraved title pages and frontispieces represent. Over the time period covered by the present publication - roughly from the 1470's to the 1870's - many printed books opened with an attractive and highly decorative title page or frontispiece; sometimes both.
In this book a limited selection has been made from the extremely wide field of known title pages, mainly by a focus on the subject matter which is primarily cartography, geography, history and topography, together with associated disciplines such as astronomy, travel and exploration.
A selection of 100 main and approx. 70 supplementary entries adequately cover specimens of different styles, formats, and national characteristics over a four-hundred-year time period from the late 15th century onwards.
The choice of decorative title pages or frontispieces includes examples emanating from Italy, Germany (including Switzerland and Austria), the Netherlands (including Flanders), France, Spain, England and some later examples published in the United States.

I will always remember the great times we had when Rodney browsed our stock and discussed the title pages, world maps and maps of the British Isles. He will always be remembered for the fine books and articles he wrote. We will miss Rodney on all fronts.