Thank you for your bids !

You can find your winning and losing bids in your auction watch list.
Unsold items are no longer available.
The online invoice is available in the invoice section of the client center.
FAQ about payment and shipping.

Since November 1996, we offer an online internet auction for old maps, master prints, globes, atlases, travel books, posters, and medieval manuscripts.
Auctions are taking place in February, March, April, May, September, October, and November and each auction contains about 2000 items.
The next auction will be from November 16-23.

When no auction is active, our Buy-It-Now catalog does offer items available for immediate sale and no commission is charged. The catalog includes maps of the World maps - America - Asia - Europe - Africa - Medieval Manuscripts - Prints - Posters, etc.


Have a look at some highlights of our current stock of items available for immediate sale.

The fine art of printmaking is concerned with the production of images by varying methods of replication onto paper, parchment, fabric, or other supports. The resulting fine prints (impressions) are considered to be works of art in their own right, even though they exist in multiples.
Printmaking encompasses woodcuts, engraving, etching, mezzotint, aquatint, drypoint, lithography, screen-printing.
Five centuries of graphic art from old master prints by Rembrandt, maps by Willem Blaeu to 20th-century prints by Chagall and Miro, Cobra artists like Appel, Corneille and Air France posters by Lucien Boucher. 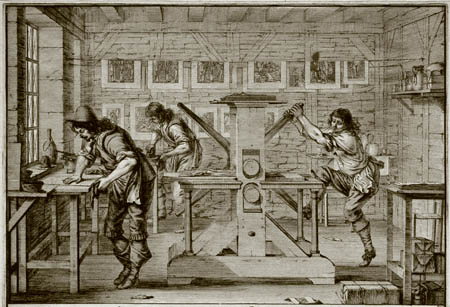 The firm was founded in 1978 in the Netherlands and in 1996 we moved to Florida where we started to produce our catalogs on the Internet was added at that year. >>>>
When no auction is active you can buy items in our online Fix-sale catalog and see what is currently available.

We have extended our Old Master Print section. Following its invention by Chinese art many centuries previously, fine art printmaking became established during the early period of the Northern Renaissance. Its leading exponents were Albrecht Durer, Martin Schöngauer, Breugel, Rembrandt and Goya.

If you are interested in the backgrounds of antique maps, prints, mapmakers, etc. then you should read our short but informative articles >>>>
Or other subjects as posters, old prints, Nuremberg Chronicle, optical prints, medieval manuscripts, trading companies, etc.

In 1692 a report states "In Europe are no more than 10 to 12 cities where books are printed in considerable amounts. One of them was Amsterdam". No wonder that Paulus Swaen Europe bv has settled in Amsterdam.
It is here, within two kilometers of the place where the printshops of Blaeu and Hondius were located, that our office is located.
Paulus Swaen Europe bv.
Pieter Lastmankade 2, 1075 KJ Amsterdam, The Netherlands
Tel. 0031 (0)20 2255198

The poster has always occupied a special place in Air France's communication. With a heritage of more than 1,500 posters by the most prestigious illustrators and artists, the Company has one of the richest collections in the world.
Air France has over 1500 posters to its name, many of which were created by the most esteemed designers and illustrators like Savignac, Solon and Cassandre, Cocteau, Mathieu, Brenet, Picart Ledoux or Vasarely.
All posters are sold with a certificate of authenticity.

Selling your maps, prints or posters

Do You Have Quality Antique Maps, old master prints or posters in Your Collection?
Not sure who to sell to and where to go to get the best price?
Among our clients are collectors, museums, and dealers from around the world who are constantly looking for fine-quality items.
Paulus Swaen Internet Auction specializes in old maps and prints.
We have been in the map business for more than 40 years and we organize online auctions for more than 25 years!

Growing numbers of map producers and publishers, from the mid-17th century in Amsterdam, were producing map and atlas works in high quality for the map market of Europe. The heyday of this long period, the 17th century, is entitled to be reckoned as the Golden Age of European map-making history. Members of the Blaeu, Hondius, Janssonius, Visscher families, and many other talented persons of the trade produced atlas maps, nautical charts, pilot guides, wall and polder maps, globes and so on.

After World War II, the conservatism of northern Europe prompted many radical young artists to leave their homes in search of a more progressive environment. A number of young artists met each other in Paris and in November 1948, formally pledged their allegiance to a new movement. This was christened CoBrA, from the capitals of the three countries represented most prominently - COpenhagen, BRussels, Amsterdam.

The Netherlands is a small country so it was depending on overseas trade. The Flying Dutchman was a sea captain who once found himself struggling to round the Cape of Good Hope during a ferocious storm.
Dutch traders settled from Deshima (Japan) to New Amsterdam (nowadays New York).
In this section, we follow the V.O.C .and W.I.C. and other Dutch overseas histories.
We not only offer interesting short articles but also offer authentic artifacts for sale.