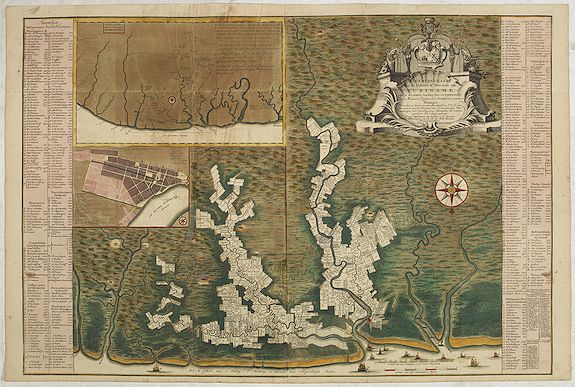 This large map is oriented with north at the bottom and depicts the colony extending inland along the watershed of the Suriname River, with hundreds of plantations lining the shores. Flanking the map are long tables identifying several hundred planters and in many cases the size of their holdings. The one town of any significant size is the capital of Paramaribo near the opening of Suriname into the Atlantic Ocean. The lack of information about the vast outlying region beyond the rivers and plantations is obscured by the liberal use of archaic "molehills" to represent mountains and other symbols for swamps and woodlands.

An inset at the upper left locates Suriname in relation to the neighboring Dutch colony of Berbice. This map is of particular interest for its references to the "maroons," groups of escaped slaves who rebelled against the Dutch administration. Along the Marawini River two "rebel slave villages" are shown, as well as a third rebel village that had been burned to the ground. Further west (i.e., to the right) mapmaker Alexander de Lavaux indicates a route he took in pursuit of the rebels, which led him deep into the interior between the Surinam and Sarameca Rivers. A second inset provides a street plan of Paramaribo, giving street names and identifying government buildings, churches, the hospital and other landmarks. The large cartouche at upper right bears the arms of the three partners in the Society of Surinam, surmounted by those of the States-General of the Netherlands.

This map is of particular interest record of one of the most important early Jewish communities in the Americas. Jews of primarily Portuguese and Spanish descent arrived in Suriname in waves in the mid-17th century, attracted by the official tolerance of the English and then the Dutch authorities. One researcher has identified no fewer than 70 Jewish-owned plantations on the map, the vast majority along the Surinam River in the vicinity of the settlements at "Joodsch Dorp" and "de Joode Savaane." (Richard Gottheil, "Contributions to the History of the Jews in Surinam")

The latter was first settled in 1635 and was the first permanent Jewish settlement in the Americas. The inset plan of Paramaribo shows a "Joode Bree Straat" and both the "Portuguese" (i.e., Sephardic) and "German" (Ashkenazi) Synagogues, known respectively as Zedek ve Shalom and Neveh Shalom.