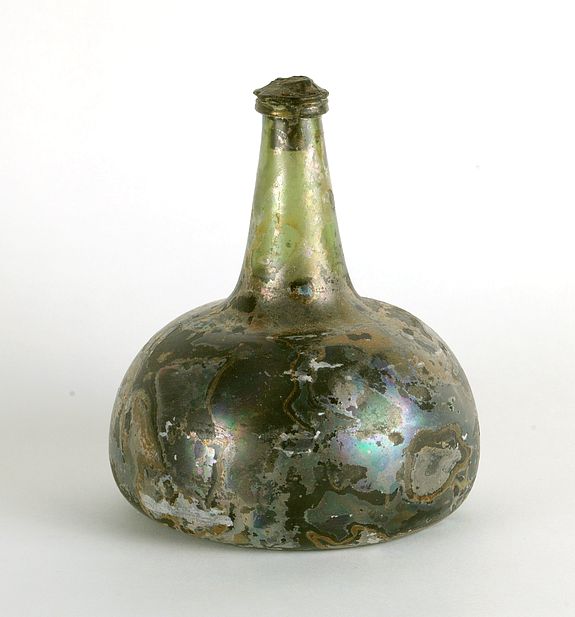 The Dutch East Company (VOC), ships rounded the Cape of Good Hope and head north along the African coast, through the Strait of Madagascar to reach the Indies. The Dutch ship carried different types of merchandise, like textiles, wine, beer, lead, red dyes (vermillion, cochineal), and mercury.

In the list of the VOC victuals, they mention French, Spanish and Cape wines.  Winemakers have been using colored wine bottles since the early 1700s. The most common wine bottle colors are dark green and amber. Other variations include blue, deep brown and frosted. Traditionally, colored wine bottles have been used to limit exposure to light. Sunlight, and even incandescent light, can cause wine to break down, affecting color, aroma and taste – eventually leading to oxidation. A wine that has been oxidized loses its depth of flavor and can begin to take on a vinegar taste.

The  Onion-shaped wine bottles are typical for the early 18th century and are sealed with cork and wax that the cork holds in place. The bottles which are survived spent most of its time under the water, which left their mark in the shape of the mother of pearl that covers the old bottle”.

The most known story about wine bottles is that of the ship called ’t Vliegent hart (Flying Heart). The ship was an 18th-century East Indiaman of the Dutch East India Company. On the third of February 1735 ’t Vliegent Hart, which was on its way to Batavia in the East Indies, sank with the loss of all hands off the coast of Zeeland. She was carrying gold and silver coinage for trading, building materials and a few thousand bottles of wine.

On the third of February 1735 the ships ’t Vliegent hart and Anna Catherina left the Roads of Rammekens. During the spring tide, the two ships, accompanied by the pilot boat Mercurius, sailed in the direction of the Isle of Wight. From there, they would sail to the Cape of Good Hope. There was a strong north-eastern wind.

Three hours after they left the harbor, the ships hit a sandbank. The Anna Catherina and it’s crew of 175 people went aground. Within two hours, the ship was wrecked by the storm and the waves. ’t Vliegent Hart broke adrift and cast anchor on the Schooneveld, near Zeeland. The crew did everything they could, but all were hopelessly lost. The ship and its crew of 256 tragically drowned.

Due to the storm and high waves, the pilot boat Mercurius couldn’t help, and returned to the Roads of Rammekens. Two months later the Chamber of Zeeland asked famous cartographer Abraham Anias to chart the position of the wrecks. In 1735 and 1736 they were in touch with many salvage operators who tried to salvage the cargo, but very little was recovered. The salvaging wasn’t easy because the cargo was light it was scattered everywhere.

’t Vliegent Hart fell into oblivion. But in 1975 Professor Dr. G. G. Schilder ‘rediscovered’ the wreck in the archives of the Library of the University of Leiden.

The wines of ’t Vliegent Hart

It’s remarkable how many different bottles of wine have been found when salvaging ’t Vliegent Hart. In the list of the victuals, they mention French, Spanish and Cape wines.

The Cape wines were only taken on board when passing the Cape of Good Hope. For this purpose, they planted enormous quantities of vines in the Cape Colony. According to the data still available, there were 5.265.000 vines in the Cape in 1768. The VOC even had their own wine cellars in Southern Africa. The founder of the Cape Colony, Jan van Riebeeck, is still considered - together with Simon van der Stel - to be the father of viniculture in South Africa.

The chambers of Amsterdam and Zeeland had their own bottling rooms. So it’s credible that the bottles found on the wreck had been bottled by the chamber of Zeeland in Middelburg.

Cash books of the VOC show us that the French wines were often from Bergerac, Bordeaux and the Loire. The Spanish wines or ‘secq' wines came from the sherry area and the islands in the Atlantic Ocean. ‘Secq’ does not mean ‘dry’. It’s probably derived from ‘sack’, which in its turn would be derived from ‘sacar’, meaning ‘to export’. Furthermore, many wines came from Germany (Rhine wines).

The bottles found in ’t Vliegent Hart resemble the form of a carafe, which is characteristic of the beginning of the 18th century. The modern form of corked wine bottles was only invented at the end of the 17th century. The wine bottles on board were probably made in Middelburg, the first Dutch town where bottle factories were founded.


A collector's item for sale.

We have a few mid-18th-century wine bottles that are still closed and full of red wine. The  Onion-shaped wine bottles are of green glass and are sealed with cork and wax that the cork holds in place. Dutch East India Company, Netherlands, ca. 1735-1750.

The many years that the bottles spent under the water have left their mark in the shape of the mother of pearl that covers the old “onion bottle”. It cannot be determined with any certainty which wine or type of wine is inside the bottle.

The provenance is uncertain; Often, this type of bottle is offered and linked to the VOC vessel "'t Vliegent Hert". We don't know to which ship these belonged. This type of early wine bottle still filled with its original wine is a rare find!

Might it still be drinkable? In theory, deep water offers perfect conditions for aging wine: cool, dark, and anaerobic. The temperature of ocean water decreases as depth increases so one can assume that sea-aged bottles have been living at cold temperatures since 1750's.
North Sea coastal waters are generally very pure (hence lots of seafood), with low salinity.
The high pressure of deep water forces corks to retain a tight seal — the water pressure counteracts the pressure inside the bottle. But with still wines, the pressure can force corks into the bottle.
The most damaged bottles, where the corks have leaked and let in seawater, do not have tremendous appeal as the full bottles have.

Of course, the wine in these bottles is no longer drinkable, but you must admit: it would make your collection more exclusive.