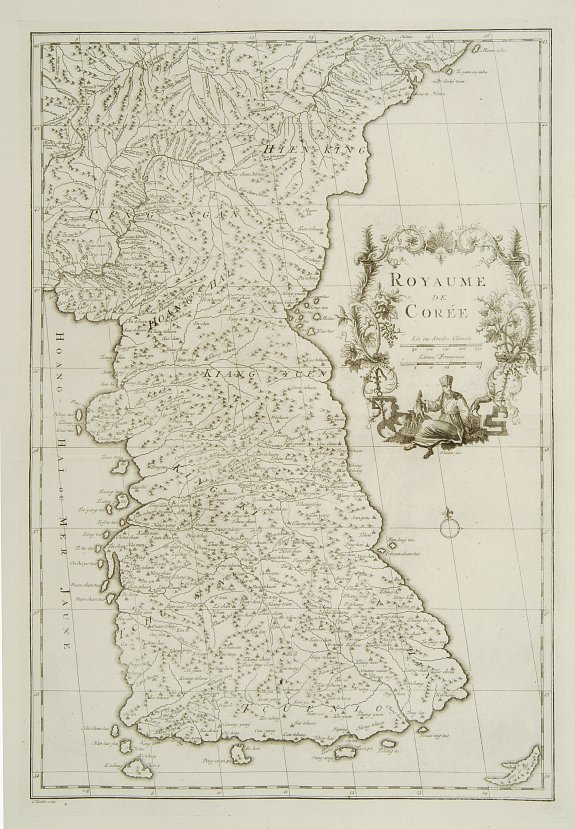 Korea was not known to Europe until after the 16th century "Age of Discovery." It was long after Marco Polo made an account of his voyage, published in 1301 under the title of "Description of the World," which was widely circulated in Europe and became the principal source of European knowledge of Asia.

The world map created in 1594 by Petro Plancius of the Netherlands is known to be the oldest existing map in Europe that made reference to Korea with the marking "Corea." (There are two earlier maps, drawn by Bartholomeu Velho in 1562 and by Abraham Ortelius in the 1580s that show the Korean Peninsula but they gave no specific name to the peninsula.) In 1646, Sir Robert Dudley’s hydrographic chart Dell’Arcano del Mare, (The Mysteries of the Sea), referred to Regno di Corai (the Kingdom of Korea).

The first Europeans who knew about the existence of Korea were the Portuguese. Since 1543 they had a trade post on the island of Hirado. During his investigations in Portugal and on the Portuguese merchant fleet, Jan Huyghen van Linschoten got to know this from Dirck Gerritszoon Pomp, nicknamed "Dirck China." Pomp, a Hollander, also in the service of the Portuguese, went to sea in 1584 aboard the Portuguese vessel "Santa Cruz".


Hendrick Hamel
The shape of and information about Korea change drastically, when Hendrick Hamel and his companions returned from their adventures on the Korean peninsula. Though Hamel made no maps himself, his descriptions of the country-influenced cartographers. Hamel landed on Cheju-do which appeared on Portuguese maps before as Ilha de Ladrones (island of thieves), but also the Mariana Islands were referred to as the Ladrones. Interesting in this regard is the fact that Cheju island existed with two different names and was thought to be two islands as well: Fung-ma and Quelpaert island. Quelpaert is probably named after a type of galleon.
Hendrik Hamel sailed as the ship's secretary from Texel to Batavia on ''De Sperwer'' in January 1653. After visiting Batavia and Formosa, the ship set sail for Japan with the newly appointed V.O.C. governor for Korea, Cornelis Lessen, on board. Unfortunately, they shipwrecked at the coast of an unknown island near Korea, which they named the Isle of Quelparts.
Many of the crew drowned. Those who survived, including Hamel, went ashore, where they were imprisoned by the Koreans and brought to the mainland where they were held for no less than thirteen years. In 1666 Hamel and a few of his companions succeeded to escape and they managed to reach Japan. In 1668 they arrived back in the Netherlands.

Still, in the same year, the account of his misadventures was published at Rotterdam by Joh. Stichter. Hamel's account, which is the first Western eyewitness of Korea, became very popular, and was not only translated into French (in 1670) , but also, in 1704 and 1732, into English with the title An account of the shipwreck of a Dutch vessel on the coast of the Isle of Quelpaert.

Jean Baptiste Bourguignon d' Anville (1697-1782),
is very important for Korean cartography as he made the cartography of Korea widely available in Europe. He published " Nouvel Atlas de la Chine, published in The Hague 1737, "The principal cartographic authority on China during the 18th century." (Tooley). d'Anville used maps prepared by Jesuit missionaries and commissioned by Emporer-Kangxi, who in 1708-1716 ordered a surveying of the country. Despite the broadening of the southern part of the peninsula, this map was in the main accurate and was widely copied in the next 150 years

Sea of Korea
In most world maps and atlases used internationally today, Korea's "East Sea" is indicated as the "Sea of Japan," It is interesting to review the historical background of the term "East Sea" and how Korea's East Sea has been recognized by neighboring countries and other western countries in the past. Historically, Korea has used the term, "East Sea" in writings since 59 B.C.
Reference to the "East Sea" was also constant in numerous maps created after the 18th century. Many geography textbooks published and used before the annexation of Korea by Japan in the early 20th century made reference to the "East Sea," "Sea of Choson" or "Sea of Korea."

The map which was created by Godhino de Eredia of Portugal in 1615 was the first map published in Europe to have called the East Sea as "Mar Coria" (Sea of Korea). Moreover, the East Sea is called "Mare di Corai" (Sea of Korea) in Sir Robert Dudley's 1647 "Carta Particolare della Isola de Giapone" which was made in England.

The Map of Asia which appears in E. Bowen's World Atlas in 1744 and 1752 also refers to the East Sea as the "Sea of Korea." The Map of the North Pacific was published by J.N. Delise of France in 1750 after his exploration of Northeast Asia also calls the East Sea "Mer De Coree." Furthermore, "Sea of Korea" appears in the first edition of the 1771 Encyclopedia Britannica.

← Mapping of Korea
Sangoku Tsuran Zusetsu →
Our website uses cookies. By continuing, you consent to the use of cookies on your device, unless you have disabled them from your browser.