The Crimean War - The Siege of Sevastopol 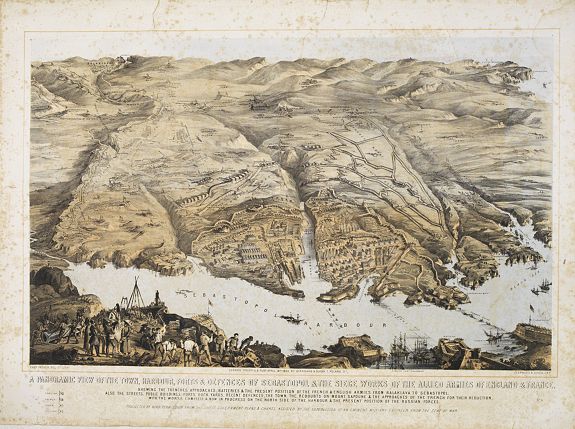 Sevastopol lay on the south bank of an inlet from the Black Sea, clustered around a small bay and defended from seaborne attack by 500 guns on both sides of the inlet. Its landward defenses were much shoddier. The city had been left undefended during the battle of the Alma, but the defeated Russians flooded back into it.

Panicked at the thought of a seaborne attack, Menshikov scuttled ships to block the inlet's entrance. He then, however, decided to abandon the base, moving the army inland on 12/24 September and leaving the city's defense to half-completed fortifications, a small garrison, and sailors of the Black Sea Fleet. With Menshikov's flight, the command went to the inspired leadership of Vladimir Alekseevich Kornilov, ably seconded by Nakhimov.

Kornilov had only days between Menshikov's exit and the arrival of the British and French, but the allies did not press their advantage with an immediate attack on Sevastopol. Together with the base's small civilian population and 25,000 soldiers and sailors left behind, Kornilov improvised a remarkable network of fortifications ringing the city.

Bombardment from land and sea began on 5/17 October, with 100,000 shells flying in a single day. The ferocity of the artillery died down over the next few days, and allied efforts to pound the city into submission failed. Kornilov was killed by a cannonball, and command of the defense went to Nakhimov. The allies sapped trenches closer to the bastions defending Sevastopol's southern, landward side to take by assault what they did not destroy by bombardment. At the same time, and for the remainder of the siege, the Russian defenders constantly repaired ongoing damage to their siegeworks from artillery bombardment and expanded their network of trenches, foxholes, and strongpoints. Losing hundreds of men every day of the bombardment, the Russian garrison received reinforcements and shipped out wounded while maintaining an active defense.

The feckless Menshikov attempted to relieve beleaguered Sevastopol through an attack on Balaklava, the British base south of Sevastopol. Without waiting to concentrate his forces, on 13/25 October Menshikov threw three columns of troops against the redoubts protecting the approaches to Balaklava. Routing the Turks holding those works, the Russians then ran up against British infantry and cavalry holding a second line of defenses and failed to make further progress.

Through a miscommunication, British light cavalry was drawn into a hopeless attack, the fabled "Charge of the Light Brigade." Russian artillery and infantry fire slaughtered them. This tactical success, however, did not enable Menshikov's men to reach the British base or break the siege.

The allies split their 70,000 troops in two. One half concentrated on Sevastopol, keeping up a periodic bombardment while digging mines under the Russian position. The other half screened the city from Menshikov's relief troops. Russian reinforcements trickling into the Crimea gave Menshikov a substantial edge in numbers over the allies, an edge he needed to use before the British and French besiegers took Sevastopol's defending bastions and captured the city. Forced into action by Nicholas despite his own deep reluctance, Menshikov decided to attack a British-held ridge east of Sevastopol, just south of the end of the inlet on which the fortress sat. Menshikov's goal, though he doubted his chances, was to grab high ground east of Sevastopol to lever the British and French out of their positions ringing the base.

In the Battle of Inkerman on 24 October/5 November 1854, 60,000 Russian troops rushed the high ground east of Sevastopol in uncoordinated masses from the northwest and the northeast. Though enjoying a surprise, the attacks ran into accurate British rifle fire and took heavy casualties, made worse by organizational chaos. Though the British were under heavy pressure, French reinforcements from the south restored the situation. The bloody fighting achieved nothing except demoralizing Menshikov and his hapless field force.

After this, there seemed little hope of saving Sevastopol. In February 1855, well aware that his bungling was winning him, political enemies, with every passing day, Menshikov tried to salvage the situation by another offensive. On 5/17 February 1855, he attacked Evpatoria, the initial allied landing site. Though it was defended by Turks, who had not performed well at Balaklava, the Russian attack failed miserably.

To make matters worse, Russia's diplomatic position was declining rapidly. At the end of 1854 Austria joined the anti-Russian coalition, though it did not intervene militarily. At the beginning of 1855, tiny Piedmont- Sardinia joined the alliance, though in pursuit of European influence, not from antipathy toward Russia. Confronted by defeat after defeat, and worn down by the strain of his responsibilities as an autocrat, Nicholas died on 18 February/2 March 1855. Before his death, he directed his son and heir Alexander II to dismiss Menshikov. Mikhail Dmitrievich Gorchakov, an aged veteran of the Napoleonic Wars, took over as commander in chief in the Crimea. He continued to funnel soldiers into Sevastopol, as the Anglo-French net around the base was never complete.

By June 1855, allied trenches were close enough to Russian bastions to make an assault conceivable. The French and British planned a major attack on Sevastopol's eastern perimeter for 6/18 June 1855, the anniversary of Waterloo. The predawn attack was detected by Russian outposts and defeated by morning. Only one bastion was temporarily captured by the French, and it was recaptured just as quickly. The boost to Russian morale proved counterproductive and temporary. It raised false hopes the war might still be won, and only days later Nakhimov was mortally wounded by a sniper's bullet.

Though Alexander harbored little hope for victory, he did not wish to begin his reign with ignominious surrender. With deep misgivings, Gorchakov and his commanders agreed to another attack on the allied ring east of Sevastopol. This assault was directed at the Fediukhin Heights, an isolated mass of high ground physically separate from the plateau on which the British and French shielded Sevastopol, so even Russian success would be pointless.

Gorchakov's ambivalence extended to his organization of the attack, which was extraordinarily indecisive and timid. On the morning of 4/16 August 1855, four Russian infantry divisions in succession and under fire crossed swamps, a river, a canal, and assaulted dug-in French troops on the heights. Predictably, they were shot down with no discernible result, losing 8,000 killed or wounded.

This desperate Russian attack convinced the allies victory was close, and the bombardment of Sevastopol intensified. Ammunition shortages meant that the Russian defenders could not respond. Expecting an epic final assault at night, the Russians were taken by surprise by the massive French storm at midday on 27 August/8 September 1855. On the southeastern side, using surprise, the French fought their way into a key bastion on the Malakhov Heights, from which repeated and bloody Russian attacks could not expel them. Other French assaults on the southwestern defenses achieved little, as did British attacks on the southern defenses. Those failures were irrelevant, for French possession of the Malakhov bastion made the entire defense of Sevastopol untenable. After a day that left 25,000 killed or wounded on both sides, though, the allies were in no position to press their advantage.

This allowed Gorchakov to evacuate the remainder of the Sevastopol garrison by boat and pontoon bridge across to the northern side of the inlet. The yearlong siege of Sevastopol killed and wounded 170,000 men, not including the tens of thousands the British and French lost to disease.

With Sevastopol fallen, there was no longer any way of denying Russia?s utter defeat, but peace negotiations seemed hopeless. Only substantial victories against the Turks in the Caucasus gave any leverage at the bargaining table. On-and-off negotiations since mid-1854 had made no progress. An Austrian ultimatum at the end of 1855 warning of war unless Russia capitulated finally forced Alexander to accept terms. The settlement was not unduly harsh on Russia itself, though it produced a substantial setback in Russian influence over the Ottoman Empire and in the Balkans. The demilitarization of the Black Sea deprived Russia of its Black Sea Fleet and prevented any naval defense against future interventions like the invasion of the Crimea. Far more serious than the penalties of the peace settlement was the destruction, for Russians and foreigners alike, of the illusion of Russian military power. Something had to change.

← Atlas Russicus
Mapping of Russia →
Our website uses cookies. By continuing, you consent to the use of cookies on your device, unless you have disabled them from your browser.