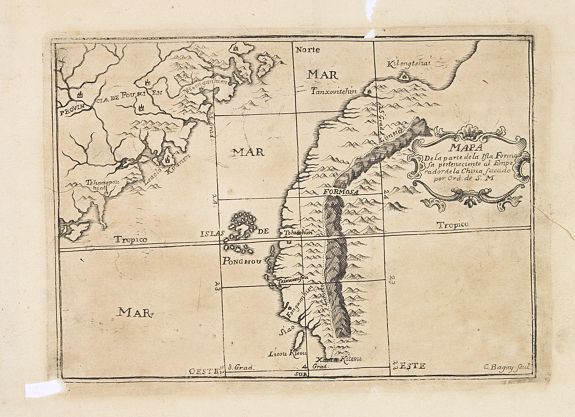 Taiwan was inhabited by aborigines of Malayan descent when Chinese from the areas now designated as Fukien and Kwangtung began settling it in the 7th century, becoming the majority. The Portuguese explored the area in 1590, naming it “the Beautiful” (Formosa). In 1624 the Dutch set up forts in the south, the Spanish in the north. The Dutch forced out the Spanish in 1641 and controlled the island until 1661, when Chinese general Koxinga took it over and established an independent kingdom. The Manchus seized the island in 1683 and held it until 1895, when it passed to Japan after the first Sino-Japanese War. Japan developed and exploited Formosa. It was the target of heavy American bombing during World War II, and at the close of the war the island was restored to China.

Pré - 1600s
Originally, Taiwan was settled by people of Malay-Polynesian descent, who initially inhabited the low-lying coastal plains. They called their island Pakan. Here is a detail of an old Dutch navigational map with this name on it.
During the subsequent settlement by the Dutch and the waves of settlers from China, the aborigines retreated to the hills and mountains, and became the "mountain people."

The 17th Century The island's modern history goes back to around 1590, when the first Western ship passed by the island, and Jan Huygen van Linschoten, a Dutch navigator on a Portugese ship, exclaimed "Ilha Formosa" (meaning "Beautiful island"), which became its name for the next four centuries.

Taiwan in the Dutch period 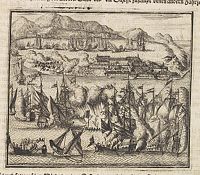 Interestingly enough, the most comprehensive historical records on Taiwan go back some 350 years, to the period of the Dutch occupation, 1624-1662. When the Dutch East Indies Company arrived, they found only the aborigine population on the island: there were no signs of any administrative structure of the Chinese Imperial Government. Thus, at that time Taiwan was not "part of China". The peninsula was called Tayouan, meaning terrace bay. This later evolved into Taiwan, and came to be the name for the whole island. On a narrow peninsula on the Southwestern coast of the island, the Dutch established a fortress named "Zeelandia", after the Dutch province of Zeeland.

In 1624 the Dutch colonized Taiwan and for 38 years the Dutch East India Company operated a trading station at Anping in Tainan. They employed a large number of cartographers and possessed accurate descriptions and drawings of Taiwan geography and mineralogy covering the entire island. Because the East India Company regarded maps as commercial and colonial secrets, they were placed in archives and not published until 1724.
When in 1662 Zheng Chenggong occupied Xiamen and Kinmen the Dutch allied with the Qing to attack him, utilizing this map, the Pas-kaart van de Chineesche Kust, Langs de Provincien Quantung en Fokien, als ook het Eyland Formosa (Nautical Chart of the Chinese Coast: Guangdong, Fujian and the Island of Formosa), and forcing Zheng back to Taiwan.

The Dutch brought in Chinese laborers as migrant workers. for the sugar plantations and rice fields. They usually came for a few years (without family) and then returned to China. Eventually, more settled, and married aborigine wives. Thus a new race was born: the Taiwanese.
In 1662 Dutch were defeated by a Chinese pirate, Cheng Cheng-kung (Koxinga), a loyalist of the old Ming dynasty, who himself was on the run from the newly established Ching dynasty. Cheng Cheng-kung himself died shortly afterwards, his son took over, but in 1683, this last remnant of the Ming Dynasty was defeated by the Ch'ing troops. 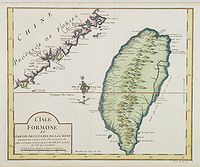 From the 1680s to the 1880s
However, the new Manchu emperors were not eager to extend their rule over the island. They were "inland" people with little knowledge of the offshore islands and even less skill at naval warfare.
In the subsequent years, immigration to the island from the coastal provinces of China increased, but the people came to flee the wars and famines on the mainland, and did not come on behalf of the rulers in Peking.
Taiwan thus remained a loose-lying area for the next 200 years. At times, the Manchu attempted to extend their control over the unruly inhabitants, but time and again the islanders fought back. There were numerous clashes between the local population and officials sent from China, leading to the well-known saying in those days: "Every three years an uprising, every five years a rebellion."

The 19th Century
That China hardly had any influence at all in the coastal waters around Taiwan is apparent from the two following examples: when in the 1870's Taiwanese pirates captured American, Japanese and French ships passing the island, these governments protested to Peking, but the Manchu emperor said: "Taiwan is beyond our territory." 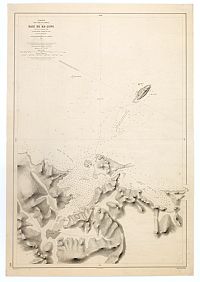 In fact, the French go so upset by the recurring attacks on their ships and the Chinese inaction, that they sent a navy fleet to the island, and for nine months in 1884-85, the northern part of Taiwan was French territory.
It wasn't until 1887, that the Manchu Imperial authorities decided to declare Taiwan to be a "province" of their Empire: they wanted to outmaneuver the Japanese, who were expanding their influence to the South.
The ploy didn't work: in 1895 the Japanese defeated the Manchu's in the Sino-Japanese War, and in the Treaty of Shimonoseki, China ceded Taiwan to Japan in perpetuity (not 99 years, like Hong Kong's New Territories, but in perpetuity, i.e. forever).
An important conclusion is thus that Taiwan was an occupied part of Imperial China for only eight years. Not "always", as the KMT and the Chinese Communists are claiming.

The Taiwan Republic
The Taiwanese didn't like the idea of incorporation into Japan, and on 25 May 1895 -- with the assistance of disenchanted Manchu officials -- the Taiwan Republic, the first independent republic in Asia was established. Here is the flag of the new nation: {short description of image}
However, a few days later, on 29 May 1895, a Japanese military force of over 12,000 soldiers landed in Northern Taiwan, and started to crush the movement. On 21 October 1895, Japanese imperial troops entered Tainan, the southern capital of the Taiwan Republic, ending its short life.

Interesting reading
- B.J. Weiss - The Authentic Story of Taiwan: An Illustrated History, based on Ancient Maps, Manuscripts and Plans.
- National Palace Museum, Taipei, Ilha Formosa the emergence of Taiwan on the world scene in the 17th century.
- Jerome F. Keating - The mapping of Taiwan.2011.

← Taiwan
Pacification of Taiwan →
Our website uses cookies. By continuing, you consent to the use of cookies on your device, unless you have disabled them from your browser.