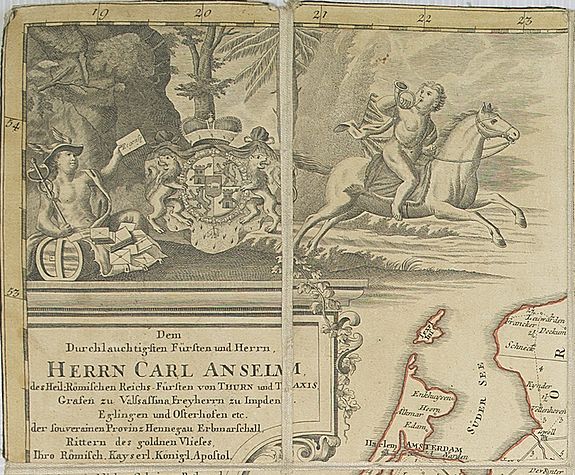 Very few maps prior to 1650 showed roads, and it wasn't until around a hundred years later that it became common for roads to be depicted cartographically. Part of this was due to fact that roads were generally very poor, and most people did not have the opportunity, nor the desire to travel. Even travel by foot or horseback could be a harrowing experience since conditions on the unpaved roads changed with seasons and the type of soil crossed. Another deterrent to travel was the highwaymen who attacked and robbed people.
Beginning in the seventeenth century, particularly in Western Europe and Northern Italy, governments realized that an improved road system would help with economic development, governmental administration, and would enable a reliable postal system.
While roads remained relatively primitive into the eighteenth century, by the middle of the seventeenth century improvements allowed for the use of wheeled coaches and wagons, which led to the development of coach service between towns.
These coaches were primarily provided by the public mail service which was designed to carry letters, packages and people. Indeed, until the nineteenth century, most passenger coach travel was monopolized by postal carriers.

Post road systems were developed throughout Europe during the seventeenth and eighteenth centuries. This led to an increase in travel by foot, horseback or in passenger coaches, which in turn led to a demand for information on routes and stopping places. At first this was met by bound itineraries and road books, but it was soon realized that road maps were more convenient and could provide more information. In the last quarter of the eighteenth century, the great improvement of roads, including hard surfaces and the development of much improved carriages, meant that there was a significant increase in road traffic, which resulted in the so-called "mail coach era," which lasted until the middle of the nineteenth century when railroads became the primary mode of transportation.

Around 1640 we first learn of stagecoach services in England (London to Oxford) and in Germany (Bremen to Hildesheim) and by 1647 no less than forty-three French towns could be reached from Paris by coach. Most of these coach services were provided by the public mail systems of the various territories which from the very beginning had been involved in the transport of goods and people. Passenger travel soon became their monopoly, protected either by law or by economic privileges and it remained theirs until well into the nineteenth century.

Increased road traffic between about 1780 and 1850 spurred the production of more and better quality road maps.
Regular road maps depicted a road network placed upon a detailed topographical background. One specialized type of map which appeared in the eighteenth century consisted of highly detailed "post road maps." These were maps showing incredible detail of the postal roads, stations (or "stages"), and the distances between them, as well as services available on the postal routes. To be useful, most of these road maps were of relatively large size, and because of their intended use for travelers, they were usually formatted so that they could be folded for carrying in a pouch and or pocket.
This was done by dissecting the maps into sections, where were then backed on linen with gaps between the sections so that they folded easily. Although many road maps were issued in the mail coach era, their hard use meant that they had a high rate of attrition and so few survive today.

John Norden was the first English cartographer to insert main roads in his county maps, some of which were published in the 1590's. No further explanation is needed for the "strip"road maps introduced by John Ogilby. On the continent, atlas publishers such as Delisle and Homann made great efforts to include a road system in their maps, not only to travel and trade, but also resulted from military considerations.

The earliest post road map was published 1632 by Melchior Tavernier - his "Carte Géographique des Postes qui traversent France". It showed all highways used by the royal posts of his time. This map was re-issued many times during the seventeenth century. Road atlases similar to those in Britain appeared in France during the second half of the eighteenth century. Central Europe did not yet contain nation-states and most of the sovereign entities were much too small to operate a postal system and had to contract for outside services, like the famous Thurn & Taxis. The road network of the region was mapped first in 1641 by Joh. Georg and Georg Conrad Jung. Their "Totius Germaniae Novum Itinerarium" covered much more than Germany proper; it included the Low Countries and Switzerland, Bohemia, parts of France and Italy as well as Western Poland. Moreover, the Jungs tried to depict all highways known to them, at least within Germany, and not just post roads.
Like Tavernier's, their map did not indicate distances. This was done by Joh.Muller in his "Geographic Map of the whole Roman Empire" of 1692. The first real post route map of the region was probably Joh. Peter Nell's "Podt Charte durch gantz Teutschland" of 1709.

← Pictorial maps
Propaganda and War maps →
Our website uses cookies. By continuing, you consent to the use of cookies on your device, unless you have disabled them from your browser.