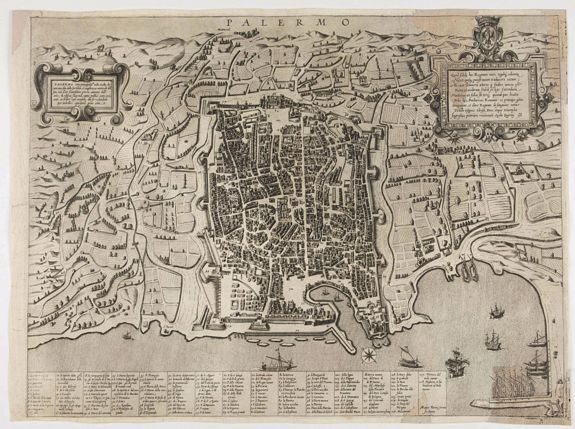 The sixteenth century was an exciting time for cartography, with a huge surge of interest in map publishing, beginning in Italy, from around 1544. The ‘Lafreri School’ maps were the product of a high-point in cartography, which took place in Rome and Venice from 1540-1570. Maps at this time were made by independent publishers, who each produced ranges of maps in different sizes, often based on large wall maps of cities, provinces, countries or regions.

Key figures at the time included; Michele Tramezini, the Bertelli family, Givovanni Francesco Camocio, and the Venetian cartographer, Giacomo Gastaldi. However, the group took their name from Antonio Lafreri, who was one of the most prolific of map publishers.

Lafreri was one of the first map publishers to collect maps into volumes of uniform size and to sell them as atlases, and he also conceived the idea of printing a title page for each volume. Other publishers followed his example and the bound atlas became the map publishers’ most popular product. Each collection was printed in runs of up to one hundred and distinguished by the individual style of the publisher.


A consequence of this approach was that there was no standardization with regard to size, so that when publishers inevitably began to bind together the various maps available to them, some maps had to be folded, while other smaller maps had to be enlarged by means of having margins added to them so that they could all be accommodated in a volume of a uniform size. One publisher, by the name of Antonio Lafreri (1512-1577) went so far as to produce a title page for one such map compilation.

As a result, despite Lafreri being a relatively minor publisher, these bound collections of maps became known as 'Lafreri Atlases'.

The cartographers and engravers of this period were Giacomo Gastaldi (c.1500-1566), Paolo Forlani who worked in Venice between 1560 and c.1571. George Lily, an English Catholic living in exile in Rome. His most famous map being of the British Isles from 1546. Pirro Ligorio (fl.1552-1563) an architect and cartographer who produced many maps, plans and views principally relating to Rome.

← Geological maps
Pictorial maps →
Our website uses cookies. By continuing, you consent to the use of cookies on your device, unless you have disabled them from your browser.