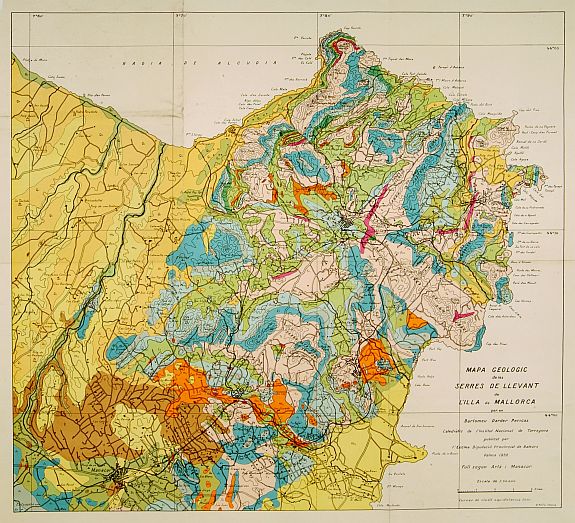 There is something about geological maps from the early twentieth century! Their colors seem more vivid than those of modern maps. Even their legends are more interesting: geological maps are special-purpose maps made to show geological features. Rock units or geologic strata are shown by color or symbols to indicate where they are exposed at the surface.
Bedding planes and structural features such as faults, folds, foliations, and lineations are shown with strike and dip or trend and plunge symbols which give these features three-dimensional orientations.


Stratigraphic contour lines may be used to illustrate the surface of a selected stratum illustrating the subsurface topographic trends of the strata. They offer a glimpse of the transportation infrastructure (steam and electric railroads, trails, ferry landings), landscape features that may not be visible today (salt marshes, swamps, tidal flats, escarpments, rock outcrops), and geology (stony and gravelly areas, quarries).

HISTORY.
The oldest preserved geologic map is the Turin papyrus (1150 BCE), which shows the location of building stone and gold deposits in Egypt.

Among the various branches of science, the earth sciences, especially geology, are most dependent on maps. Geology was the exciting new science of the nineteenth century, much like space exploration or biotechnology in the twentieth. New concepts appeared of unimaginably vast spans of time, of strange extinct creatures, of systematic ways of exploring for economic minerals.

A small but creditable geological map of the United States was produced in 1809 by William Maclure. In 1807, Maclure undertook the self-imposed task of making a geological survey of the United States. He traversed and mapped nearly every state in the Union. During the rigorous two-year period of his survey, he crossed and recrossed the Allegheny Mountains some 50 times.

The first geologic map of Great Britain was created by William Smith in 1815.

In France by 1868, Napoleon III decreed that geological mapping would be central government expense and implemented by the Service Géologiques des Mines within the Ministère des Travaux Publics.

By the second half of the 19th century most European nations had detailed geographical maps. At the end of the century, these surveys were bought together in the "Carte Géologique Internationale d'Europe" (1:1,500,000), which was one of the first important international maps made with the cooperation of various governments. For this map, an international color scheme was adopted to replace the arbitrary colors of earlier maps.

United States.
The United States did not lag behind the European countries in geological mapping. From early 1830 to 1840, most of the eastern states were geologically mapped by such brilliant men as W.B.Rogers of Virginia and Edward Hitchcock of Massachusetts. For the history of geological surveys in the United States the interested collector is referred to George P.Merril, Contribution to a History of American State Geological and Natural History Surveys.

TINTS AND COLOURS.
Most geographical maps are "chromochromatic", that is, the areas which are underlain by the same formation have the same color or pattern. Geologic maps can be successfully made in black-and-white patterns if the judgment is used in their selection.

← Folding maps
Lafreri School maps →
Our website uses cookies. By continuing, you consent to the use of cookies on your device, unless you have disabled them from your browser.