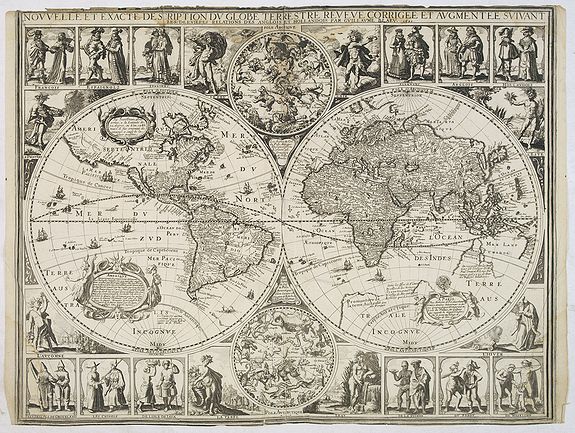 The aesthetic element played an important role in the success of Amsterdam's map production. Special products were the maps with decorative borders, "cartes-à-figures": which were published for the world, the four continents and various European countries and regions.

The map decoration was relegated to the map borders in order not to detract from the actual contents of the map. A more rigorous approach was developed, in which the decorative elements were related directly to the map area involved.

Town plans and views, combined with costumed figures of natives characteristics for the map area, were the most sought-after subject matter for the decorative borders.
It is noteworthy that publishers, even though they could call upon a large stock of existing prints, still specially commissioned well-known artists to produce new designs.

The two-volume work contains an illustrated descriptive catalog of all Dutch single-sheet maps with decorative borders. In this cartobibliography the history of each copperplate in its different states are described (c.120 prototypes in about 350 states). Attention will be paid to both art-historical and geographical aspects.

A separate volume contains a selection of full-scale reproductions.
The third chapter provides an overview of the development of decorative borders on folio maps. The preferred design of these borders combined town views with costumed figures from the regions depicted. The printed sources used by the engravers and etchers, as well as the surviving manuscript models made for specially commissioned designs, are discussed in some detail.

← Celestial Charts
Folding maps →
Our website uses cookies. By continuing, you consent to the use of cookies on your device, unless you have disabled them from your browser.