The earliest maps to use the name Etats-Unis (United States) in the title. 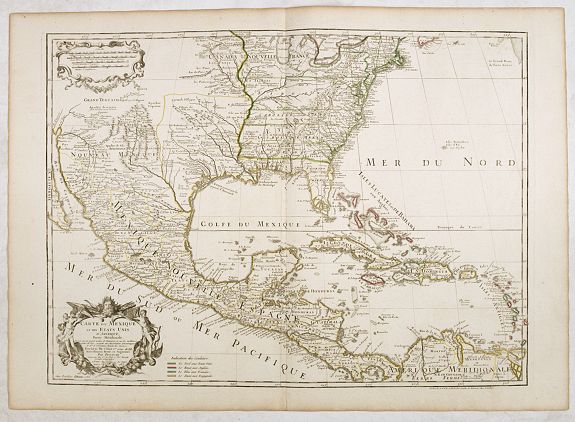 In 1778, a map was published in France made by J.B.Eliot, referring to the "United States" in the title. The "Eliot map" has been described as "the earliest to include in its title "les Treize Colonies Unies de l'Amerique ...", thus claiming priority in the naming of the new nation, in its French translation ..." 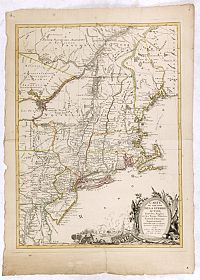 Eliot's map, which was drawn from American sources not previously utilized on any printed map, is generally regarded as the first printed map to bear the name of the United States ("Etats Unis").
The map translates from the French as "Map of the Actual Seat of War between the English and the Thirteen Colonies' of North America, as described by J.B. Eliot, an 'Engineer of the United States".
If Eliot's claim to be "Ingénieur des Etats Unis" is true, at a time when the two versions "United Colonies" and "United States" were in parallel use, both denoting an independent political entity separate from the British, while reflecting uncertainty about the name for the new republic.

Read more about the "Eloit map" in a first state.

J.B.Eliot.
Eliot was an American military engineer and aide-de-campe to General Washington, and after preparation, he forwarded the draft for this map to Paris where it was engraved. The French had declared an alliance with the American Revolutionaries on May 4th 1778, and this map would have served to raise the interest in this conflict in France, as well as being a tacit recognition of American Independence.


Thirteen States.
"So far as I am aware, the first printed map devoted to the thirteen states, and to use the a name distinguishing them from their previous status of British Colonies was published neither by an Englishman, Frenchman or American, but by an Italian, Antonio Zatta. His map, "Le Colonie Unite Dell'America Settentr.le ..." was published in 1778, in his "Storia Dell'America Settentrional", and then re-issued in the "Atlante Novissimo" (1778-1785). The map is an Italian edition of John Mitchell's landmark map of "The British And French Dominions in North America ...", first published in 1755; Zatta's version, engraved in 1778, includes a small number of notes relating to events in the Revolutionary War, but is otherwise a close copy of Mitchell's original." - Ashley Bayton Williams.

The first map, that Ashley Bayton Williams has located, devoted to the thirteen states, that uses the name United States (in its French form) in the title is Rigobert Bonne's map of July 1781.

The end of the Revolutionary War.
The end of the Revolutionary War, settled by the Treaty of Paris early in 1783, resulted in many maps published that year. Maps issued in previous years with "British colonies" or similar title words were reissued in the 1780's with "United States" in the title, and few other changes.
The checklist compiled by Ashley Bayton Williams " Early maps devoted to the United States is very useful.
The list contains maps including the region bounded by Florida in the south, the Mississippi in the West and Britain's Canadian possessions in the North, who are published up to 1800. 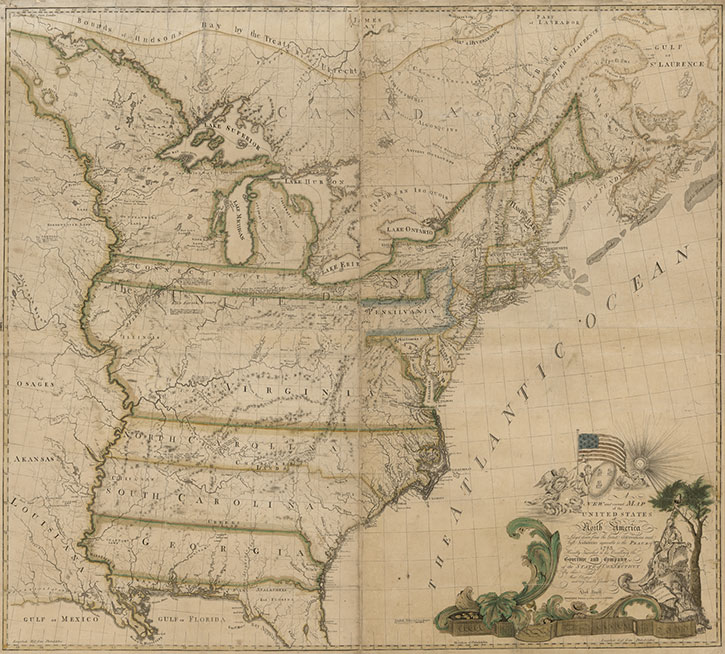 Abel Buell's New and Correct Map of the United States, 1784.
In the years following the end of the Revolutionary War, Americans took their first hesitant steps towards cartographic independence, with a number of fine large-scale maps of the United States, by Abel Buell, William McMurray, and Abraham Bradley Jr, for example.
The first map of the United States 'compiled, engraved, and printed by an American' was Abel Buell's A NEW AND CORRECT MAP OF THE UNITED STATES OF NORTH AMERICA LAYD DOWN FROM THE LATEST OBSERVATIONS AND BEST AUTHORITY AGREEABLE TO THE PEACE OF 1783, published in 1784. The map is included in Schwartz & Ehrenberg and other map histories, and shows the American flag printed on a map for the first time.

This landmark map of extraordinary significance to the historical record of the United States was published by Abel Buell in 1784. Notably, this is the first map of the newly independent The United States compiled, printed, and published in America by an American. Additionally, it is also the first map to be copyrighted in the United States. Only seven copies are known to exist and survive in major institutions in the United States, the United Kingdom, and Spain. A very fine example of the Buell map, was sold in 2010 for $ 1.8 million to the philanthropist David M. Rubenstein, who has lent it to the Library of Congress.

In 1770, Buell moved to New Haven, Connecticut and went to work for cartographer Bernard Romans. After the American Revolutionary War ended, Buell used the minting machine he had invented to mint the State of Connecticut's first official pennies. By 1784, Buell cast his own typeset and published the first American-made map of the United States. The wall map measured 43 x 48 inches, was printed in four sections, and hand-applied watercolor gave the map its color. In 1800, Buell went to England on behalf of the State of Connecticut to purchase copper. While there, he gained both practical knowledge and a sum of money that allowed him, upon his return, to establish one of Connecticut's first cotton mills.

← Sea charts
Wall maps →
Our website uses cookies. By continuing, you consent to the use of cookies on your device, unless you have disabled them from your browser.