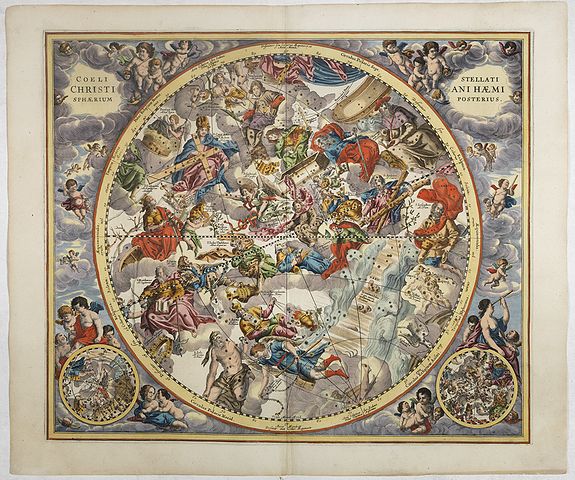 The earliest representations of the sky were actually globes, on which the constellations were shown as though viewed from a God-like position beyond the stars; this meant that the constellation shapes were represented back to front by comparison with the way we see them from Earth.. 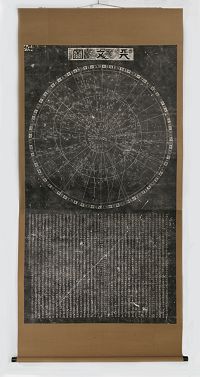 In the fourth century B.C. three Chinese astronomers drew star charts based on their own observations. These were used by Qian Lezhi, an astronomer living in the fourth century A.D., to make a bronze planisphere. The planisphere showed the stars determined by the three ancient astronomers in red, black and white. The original works of the fourth century B.C. and the planisphere are now lost.
The Dunhuang chart, now kept at the British Library in London, is a manuscript example of Qian Lezhi's work and contain more than 1300 stars and was composed around the years +(649-684). Using precise mathematical projection methods, it preserves a remarkable accuracy of 1.5 to 4° for the brightest stars. It is the oldest known star chart from any civilisation and the first pictorial representation of the classical Chinese constellations.

The most startling difference between Chinese and Western astrology is the method or system the Chinese used to track the planets throughout the night sky. Each civilization was able to distinguish planets from the other stars located in the sky, but the reference points found in the sky are much different.
The Western (Mesopotamian-Babylonian-Hellenistic-etc...) stellar positions are found by reference to the ecliptic, known to the Chinese as the Yellow Path, that is, an imaginary line through the heavens traced by the Sun. This may seem like the same thing, but the Chinese locate heavenly bodies with respect to the celestial north pole and the celestial equator (called the Red Path by the Chinese) rather than with respect to the ecliptic (termed the Yellow Path).

As a consequence of the two different observational systems, two kinds of astrological interpretation sprang up. In the West, astrology is based on the computations of movements of planetary bodies along the ecliptic, or zodiac.
In Chinese astrology, the "lunar zodiac" has prime importance. In this, the sky is divided into 28 segments, each one representing a day of the moon's path through the sky. This leads us to the fact that in Chinese astrology there are many stars and constellations of importance to the Chinese astrology that are irrelevant in Western astrology.
This being said, a Western astronomer would have a hard time recognizing a star map produced by a Chinese astrologer, even though it's the same sky!!

Western celestial charts
The oldest globes that have survived, such as the Farnese globe of the second century B.B. and the Arabic globes of the thirteenth century, are celestial.

An early form of flat star chart was the astrolabe, popular with the medieval Arabs. Usually made of brass, the astrolabe was a disk on which the positions of bright stars were indicated; the same principle lives on in the star-finding devices called planispheres used by present-day amateur astronomers and sailors. The earliest surviving astrolabes date from the tenth century AD, but written evidence shows that they were known much earlier, possibly even in the time of Ptolemy, around AD 150. Astrolabes are a rich source of old star names.

The earliest surviving depictions of the Ptolemaic constellations on paper are found in illuminated manuscripts of the poetic works of Aratus and Hyginus dating from the 9th century and onwards. These illustrations were the creation not of astronomers but of artists who interpreted the figures quite freely, with little concern for the framework of the underlying stars.

The first printed star chart of the Greek constellations came in 1515 when Albrecht Dürer, the great German artist, drew the first European printed chart of the heavens with the help of Johannes Stabius, an Austrian mathematician, and Conrad Heinfogel, a German astronomer.
Star maps improved as astronomers surveyed the sky in more detail and with greater accuracy. Renaissance artists gave full swing to their imagination in depicting the figures representing the constellations; indeed the stars themselves were almost lost in the magnificence of the celestial figures.

Several projections are used for star charts. Stellar hemispheres are usually shown in some polar projection, with the celestial pole in the center. The polar stereographic projection will show the shapes of constellations more correctly, but the scale will increase toward the periphery of the chart.

The first great star atlas was produced in 1603 by Johann Bayer, a lawyer in Augsburg, Germany, who had a passion for astronomy.

Hevelius and the Firmamentum Sobiescianum.
A few years after Bayer’s Uranometria appeared, astronomy was revolutionized by the invention of the telescope, which not only showed faint stars that had hitherto been invisible but also greatly improved the accuracy with which star positions could be measured. One man remained unmoved by this advance: Johannes Hevelius, an astronomer from Danzig (the modern Gdansk in Poland). Stubbornly, Hevelius continued to measure star positions with naked-eye sights throughout his life, worrying that lenses might introduce positional distortions. 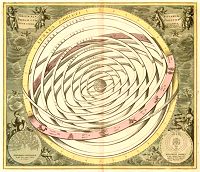 Andreas Cellarius was a Dutch-German cartographer, best known for his Harmonia Macrocosmica of 1660, published by Johannes Janssonius and re-issued by Schenck and Valck.


Flamsteed’s Atlas Coelestis
Celestial mapping took another major stride in the 18th century with the work of the first Astronomer Royal of England, John Flamsteed, who cataloged nearly 3000 stars with unprecedented precision from the newly founded Royal Observatory at Greenwich.

Bode’s "Uranographia", published in 1797-1801 by the German astronomer Johann Elert Bode, director of Berlin Observatory. Bode’s Uranographia was the first atlas to depict virtually all the stars visible to the naked eye (i.e. down to the sixth magnitude), plus a fair selection of those down to six times fainter (eighth magnitude).

← AtlasesNO
Figured border maps →
Our website uses cookies. By continuing, you consent to the use of cookies on your device, unless you have disabled them from your browser.