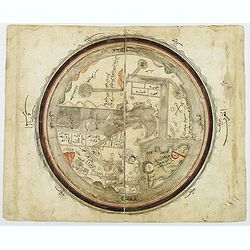 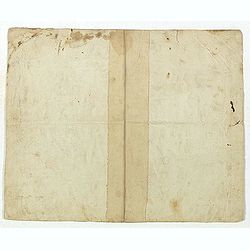 This is a map in the traditional Islamic style. It is based on a map that accompanied a commentary Kitab al-masalik wa-al-mamalik (Book of Realms and Kingdoms) by Al-Istakhri, produced in the middle of the tenth century, approximately 930-933 (318-321).

A second version of the commentary was produced in 951 (340). The world map that accompanied the commentaries was a stylized representation of the world, more cosmological than geographical. It depicted a spherical world surrounded by seas. South is at the top. It is centered in Arabia with the tip of Africa pointing East. It was more of a diagram than a map, summarizing the world as then known to Arab and Persian geographers. Twelfth-century copies of this original map are held in Berlin and Bologna. The map then became the template for subsequent world maps including a World Map by Ibn Hawqal, produced in 988 (378) and further refined by Ibn al-Wardi in a world map produced around 1593 (1001) and now held in the British Library.

So the current map is derived from Al-Istakhri through Ibn Hawqal and Ibn al-Wardi. It was probably held in Istanbul as most of the variants of Ibn Hawqal were kept in the Topkapi Museum in Istanbul.

It was made later than 1600 because it has more text than the 1593 Al Wardi map, suggesting a later overlay of some description. There is a variety of Arabic script styles also suggestive of overlain writings at different times. The style is less geometric than the Al-Wardi maps indicating a greater Ottoman influence. Research and text by John Rennie Short (Professor of Public Policy at the University of Maryland (UMBC).)

al-Istakhri's world map is oriented with the South at the top, just as in the T-O maps of contemporary Latin Europe, but instead of the Earthly Paradise, the Arab scholars knew enough to place in the furthest East both China and Tibet.
The map shows Egypt and the river Nile in the right and further on "Country of the Black People". Note how the tip of Africa points eastwards, a mistake which the Chinese geographers were the first to correct.
In the lower right corner Europe, i.e. "Country of the Romans and Franks".. " The map shows the Indus in the lower left, with the Indian Peninsula, Tibet and Chinese Empire and The Red Sea colored in red. The outer circles represent the seas.
The manuscript is a cosmology, not meant to be accurate geographically, but only to present the reader with a systematic overview of the existing knowledge about the world at the time. According to Arab geographical theory based entirely on Ptolemy, this would be a sphere. Since the far side of a world sphere (an upside-down world) was practically inconceivable, only a hemisphere was thought to be inhabitable. This could easily be “projected” onto a flat area and represented by a circle. That Ptolemy represented the inhabitable world as occupying 180 degrees of the earth supported this idea. Thus al- Istakhri represented the world as a circle surrounded by the Encompassing Sea, with the two main seas reaching in from the east and the west toward the center, where they would join except for a small, narrow land barrier—the barzakh of the Qur’an . In his text, al-Istakhri gives a simple description of the world to explain his map. “The earth is divided into two by the two seas so that we have a north or cold half and south or hot half. People in these two halves get blacker as you go south and whiter as you go north etc.” The main kingdoms are listed together with the kingdoms that adjoin them. This is the only place where non-Islamic areas are given any mention. Measurements are attempted; thus the width from the Encircling Ocean in northwestern Africa to the ocean in China was 400 days’ journey. However, the distance from north to south was not measurable. There was 210 days’ journey through inhabitable lands, but the extreme north was uninhabited because of intense cold and the extreme south because of intense heat. The seas were described briefly, and the fact that the Khazar [Caspian] Sea and the Khwarazm [Aral] Sea were landlocked is mentioned, as well as the sea connection between the Encircling Ocean and Istanbul—that is, the Baltic joins up to the Bosporus.
Read more about the history of Islamic cartography. [+]