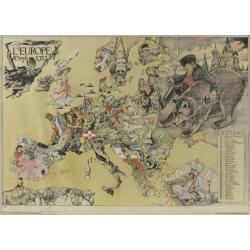 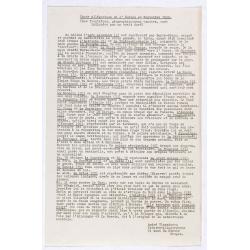 A rare oversized serio-comic map of Europe at the start of the Second World War depicting stereotypes of 31 countries, as listed in the key lower right, including Britain as a woman with battleships on leads; France as Marianne, leading her troops into battle; Germany, with a swastika sash, stabbing a female Poland; and Russia as a Cossack holding a hammer and sickle, his arm around a large brown bear.
Very scarce, although as mentioned on the map 150 were printed, only three, nos. 8, 9, 10, 13 and 17 (this example), are known to have survived.
Around the title is a vignette of a skeleton, helmeted and armed with his bloody scythe, carrying a war torch. A floating ribbon bears as a motto a citation from Horace 'Ille terrarium mihi angulus ridet' (this corner of ground smiles at me), a device with a double symbolic meaning, that goes as well with this part of Europe, chosen by Mars as his field of activity, as Poland which, desired by both Germany and Russia, was the origin of the worldwide catastrophe.
Cornelis André Vlaanderen (1881-1955), was a Dutch graphic artist and typographer, who specialized in book illustrations, bookplates and posters. In 1905 to open his own business and began designing advertising for the Gazelle Rijwielfabriek (a bicycle manufacturer) not long afterward. It is estimated that he created at least 500 advertisements for Gazelle between 1914 and 1929.  Vlaanderen moved to Belgium in August 1929. He first settled in Ghent and in August 1930 moved to the suburbs of Bruges (Brugge). He lived in Bruges from 1939 until his death.
Accompanied by an explanatory text sheet in French and translates into English, as follows:
In the middle, the German ogre (3) is represented by Blue Beard, helmeted and wearing a strap bearing the swastika. The tyrant, having already assassinated two women Austria (5) and Czechoslovakia (4), stabs Poland (6) with his left hand. A fluttering sleeve of her blouse simulates the 'corridor'; close by, The Free City of Danzig, is marked in red. With his right hand Blue Beard brandishes a sharpened blade to the west, where Marianne (2) the French virgin, styled with a Phrygian cap, commands her troops. To the right of the enemy, the head of a murdered Jew is wedged, and we glimpse an English airplane that drops propaganda leaflets over the country. Great Britain (1) is symbolized by Dame Albion, directing her fleet, with her bag overflowing with reinforcements. The Hebrides and Shetland Islands are indicated by airplanes. To the northeast, the Finnish reindeer herder (12) watches with discontent brutal Russia (7), who, leaning on his bear, tramples embarrassed and bloody Poland; in the background, the towers of Red Square in Moscow are seen. The three little Baltic states: Lithuania (9), Latvia (10), and Estonia (11), observe in terror the colossus, armed with a hammer and a bloody sickle and ask themselves what fate is reserved for them.
Hungary (22) feels suffocated under the weight of the corpses of its two neighbors. Romania (23) watches the Russian bear with dread, and Bulgaria (26) also finds himself in an unenviable situation. Puss in Boots represents Italy (8), wearing a sash with the fascio romano on a black background and wearing a plumed hat; he doesn't inspire any confidence. Corsica and Sardinia are covered by the flag of the power on which they depend. In Sicily, a cannon aimed at Tunisia. Albania (25) forms for the Puss in Boots 'a nest of bothersome mice'. Yugoslavia (24), guard dog, is ready to defend its flag and the piece of meat it holds between its feet.

Spain (20), is represented by a bullfighter, who doesn't have the time to concern himself with European affairs since he must devote all his attention to repairing his holed red cape; behind him, we see his still devastated country in ruins. At its southern tip, at Gibraltar, emerges the British cannon, that protects the approaches to the Mediterranean. Portugal (21), nestled in the folds of his national flag, makes eyes at Dame Albion and at Marianne.

Follow the other neutrals: a Dutch soldier (16) in front of his flag, aims at a plane, that passes over his territory. Belgium (17) also posed as a sentinel, is ready to defend his three-color flag and his neutrality.

No. 18 designates Luxembourg and No. 19 represents the Swiss cross. In the north, Norway and Sweden are symbolized by guard dogs, held on leash and with their collars in national colors. The Danish (15) still smokes his pipe without losing sight of everything happening below him.

In the south, Greece (27) is represented by Athena (Minerva) posted in front of Ionic columns, armed with a lance and wearing a helmet ornamented with feathers.

No. 31 shows us Turkey, sitting on his Smyrna rug and savoring his hookah, while he raises his eyes toward what is going on higher up. Behind him the crescent and sickle shine on a red background.

Finally we notice again the coast of North Africa with Morocco (28) - of which Spanish Morocco is delineated -, Algeria (29), and Tunisia (30). The illustrated title of this historic document shows Death, helmeted and armed with his bloody scythe, carrying a war torch. A floating ribbon bears as a motto a citation from Horace 'Ille terrarium mihi angulus ridet' (this corner of ground smiles at me), a device with a double symbolic meaning, that goes as well with this part of Europe, chosen by Mars as his field of activity, as Poland which, desired by both Germany and Russia, was the origin of the worldwide catastrophe.