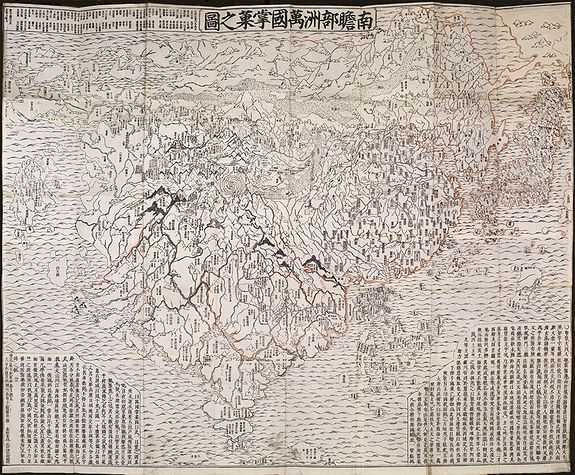 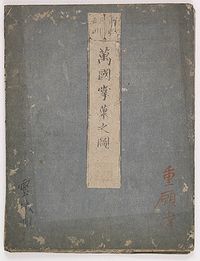 ZUDA ROKASHI [Priest Hotan] - Nansenbushu Bankoku Shoka No Zu [Outline Map of All Countries of the Universe]
Published in Kyoto, 1710 (Hoei 7 = Year of the Tiger) by Bundaiken Uhei (fl. 1680-1720) was a Japanese bookseller and publisher active in Kyoto during the early part of the 18th century and is best known for his publication of this important Buddhist world map.
45.1 x 55.7 inches. / 114.5 x 141.5 cm.
With contemporary outline coloring and North, East, and South West directions added in red ink.
Strong impression, printed on several sheets of native paper, joined. Folded as usual and mounted on 2 blue cardboards with title piece. (size 240 x 180mm, slightly spotted and scraped) in a modern linen case. The map is in very good to mint condition.

This map is a great example of Japanese world maps representing Buddhist cosmology with real-world cartography. It is the earliest one and - therefore - the prototype for Buddhist world maps.

At the time Japan maintained an isolationist policy, which began in 1603 with the Edo period, under the military ruler Tokugawa Ieyasu, and lasted for almost 270 years. Although knowing about the world map by Matteo Ricci, published in Peking in 1602, Japanese maps mainly showed a purely Sino-centric view, or with acknowledgment of Buddhist traditional teaching, the Buddhist habitable world with an identifiable Indian sub-continent.

The map was drawn by the scholar-priest Zuda Rokashi (1654-1728), (or Hotan his religious name), the founder of Kegonji Temple in Kyoto, and illustrates the fusion of existing Buddhist and poorly known European cartography.
The language is Chinese, except for a few Japanese characters on the illustrations of European countries.
South of Jambu-Dvipa, India is recognizable in its peninsular form. Japan itself appears as a series of islands in the upper right and, like India, is one of the few recognizable elements - at least from a cartographic perspective. China and Korea appear to the west of Japan and are vaguely identifiable geographically, which itself represents a significant advancement over the Gotenjikuzu map. Southeast Asia also makes one of its first appearances on a Japanese Buddhist map as an island cluster to the east of India.

Europe, which had no place at all in earlier Buddhist world maps, making this one of the first Japanese maps to depict Europe, is shown at upper left as a group of islands, which can be identified from Iceland to England, Scandinavia, Poland, Hungary, and Turkey, but deliberately deleting the Iberian Peninsula. Umukari [Hungary], Oranda, Baratan, Komo [Holland or “the country of the red hair”], Arubaniya [Albania?], Itarya [Italy], Suransa [France], and Inkeresu [England] are all named. Africa appears as a small island in the western sea identified as the “Land of Western Women.”
On the lower right, South America is featured as an island south of Japan, with a small peninsula as part of Central America, carrying among just a few place names including four Chinese characters, whose phonetical Japanese reading is “A-ME-RI-KA”. North of Japan, a land bridge joins Asia with an unnamed landmass, presumably North America. Africa is not shown at all.

On the other hand, this map is much more than a world map, and the main concept by the author was to celebrate a historically very important event. The map echoes the pilgrimage route of the famous Chinese Buddhist priest Hsuan-Tsang (or Xuan Zhuang, Genjo in Japanese; 602-664 A.D.), who traveled to India to visit sacred places of Buddhism and also to collect holy Sanskrit writings.
So the largest part of the map is depicted to "Jambu-Dvipa" with the sacred Lake of Anavatapta (Lake Manasarovar in the Himalayas) at its center, from which the 4 rivers Ganges, Oxus, Indus and Tarim are flowing.

This all was based on the Japanese version of Hsuan-Tsang's Chinese narrative, the Si-yu-ki, printed as late as 1653. Here numerous details are given, including the interesting feature of the so-called "iron-gate", shown as a strongly oversized square, and the path taken by the monk whilst crossing the forbidden mountain systems after leaving Samarkand.

Also, in the upper left corner 102 references from Buddhist holy writings and Chinese annals are mentioned to increase the credibility of the map.

The first Buddhist world map was printed in Japan and the prototype for all subsequent Buddhist world maps was printed in Japan until the late nineteenth century. The author, Hotan (1654-1728), was a scholar-priest and founder of the Kegonji Temple in Kyoto. The earliest known example in Japan is the Gotenjiku Zu (Map of the Five Indies) by the priest Jukai dating from 1364, and now preserved in Horyuji Temple in Nara. However, Hotan’s map was revolutionary in being the first printed Oriental map to introduce detailed Western cartographic information into this traditional Buddhist cosmological view and to attempt to merge the two together into a comprehensible form.

Europe is depicted as a series of islands in the upper left of the image, whilst South America is likewise another island in the lower right of the image. Africa is omitted completely. China and Japan are clearly defined in the upper right of the map. The popularity of the map is evidenced by the fact that although the map is dated 1710, it was reissued unchanged in numerous editions through to about 1815, and spawned innumerable copies and derivatives over the next 150 years. A rare and important cartographic work.

The map is based on the pilgrimage route of the famous Chinese priest Hsuang-Tsang (602-604) who traveled to India in the 7th century to collect holy Sanskrit writings. The first printed Japanese version of the Chinese narrative of the Si-yu-ki was issued in 1653, and was a major incentive for the publication of this map, which was used for Buddhist propaganda and education.

Two identical versions of this woodblock map appeared in 1710. The more common was published by Chobei Nagata of Kyoto.
A less common example was published by the bookseller Bundaiken Uhei and corresponds to this example. Bundaiken Uhei’s mark and name appear in the lower-left quadrant. In most examples coloration varies.

A strong crisp image suggests that this is one of the first examples that Bundaiken Uhei printed, as wooden plates tend to wear quickly and many other examples show signs that the woodblock was more heavily worn.