Manuscript chart on vellum of the Java Sea by Isaac de Graaf. 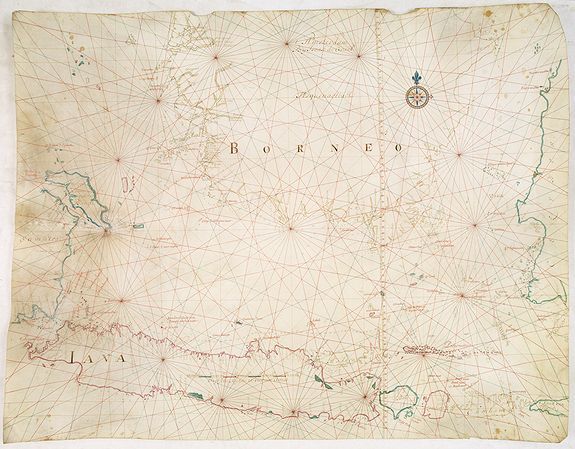 GRAAF, I. = [Manuscript chart on vellum of the Java Sea] Amsterdam, 1743. Size: 30 x 39 inches. / 76 x 99cm. Pen, ink and gouache on vellum: strong and resistant to all kinds of weather. Very good condition.
One of the few manuscript charts on vellum in private hands, signed by Isaac de Graaf. ORIGINAL MANUSCRIPT MAP IN RED, GREEN AND BLACK INK showing the Java Sea centered on the Island of Java, Southern part of Borneo and parts of Sumatra and with Bali Island nearby.

One decorate compass rose and Chart maker's name in top "'t Amsterdam Bij Isaak de Graaf. One sophisticated scale bar within Java : Duijtsche Mijlen 15 voor een Graat.
The place of origin and the name of the chart maker are located centrally at the top of the chart. No date is reported. One decorative secondary compass rose (NE) us situated at the upper right. In a contemporary hand on verso in the left and right outer margin "Detroits debanca, de Sonde, de baly, Islles de Java, Celebes, borneo, de Sumatra".

The chart's content, handwriting and compass rose are almost similar to a chart, dated 1742, mentioned in H. Kok, Sailing for the East: History Catalogue of Manuscript Charts on Vellum of the Dutch East India Company (VOC) 1602-1799 (7.17 ). This chart is listed as No. 7.18 has the date of 1743 attributed by prof. Gunter Schilder and Hans Kok, based on some additional islands drawn in on this example. Contrary to the south coast, the number of toponyms along the northern coast is much larger and oftentimes using local names.

Prof. Schilder has found only 5 examples of charts of the Java Sea that are signed by Isaak de Graaf. As Isaak de Graaf died in 1743, this must have been one of the last charts made by the Master and map maker of the V.O.C.

Isaak de Graaf
Famous for his work, Isaak de Graaf (1667 - 5 September 1743), the Dutch cartographer is one of the greatest map makers of his time. Isaak de Graaf was born to Susanna Pietersz Eppingh and Abraham de Graaf in the year 1668. Since his father Abraham de Graaf was also a renowned cartographer, Isaak de Graaf had the privilege of taking navigating lessons from a very young age. He started his career as a clerk cum cartographer in the Amsterdam Chamber of the Dutch East India Company. Soon he was appointed the supervisor of the Atlas Amsterdam. As a reward for his excellent work, the Vereenigde Oostindische Compagnie or the East India Company deputed him as the official cartographer in the early 18th century.
The instructions given by the Amsterdam Chamber on 3 August 1705, have been preserved, indicate what sort of work was expected of him. The provisions in this diverge only slightly from those given to his first predecessor Hessel Gerritsz. almost a century earlier.
Like his predecessors, alongside the Atlas Amsterdam Isaak de Graaf fulfilled a vast and permanent task in making of certain basic maps (leggers), which served his assistants as examples in the multiple copying of charts to be used on Company ships.
In his instructions Isaak de Graaf was told he should "... correct, improve, and amplify the charts for the fleet so that the ships, in service both outward- and homeward-bound and in the Indies, might have the best indications, and sail the safest routes so that their voyages may proper and come to a safe completion". For a period of nearly forty years, De Graaf was therefore responsible for the equipment of the VOC ships with hand-drawn charts and navigational instruments.
Another part of De Graaf's duties was the complete revision of the standardized list of charts and navigational instruments which were used as a check when the ships were being fitted out for the journey to the Far East.

In what is known as the Kahier van de Personeele Quotatie te Amsterdam over het jaar 1742, the Amsterdam tax records for 1742, Isaak de Graaf is listed as a capitalist, enjoying an income of 2500 guilders. Isaak de Graaf got married to Saderina de Brauw and served the Dutch East India Company till death. He died on 5 September 1743, at an age of seventy-five, after an industrious life of more than half a century as map-maker to the Amsterdam Chamber of the VOC.

Compass rose.
A prominent feature, shown on early sea charts, consists of the compass rose. They derive from the earlier used wind roses, as in Mediterranean portolan's, where directions were referenced to prevailing winds, until the magnetic compass was introduced.
This compass rose is fully-drawn and beautifully coloured. As usual it is located within a landmass and out of the way of the shipping route, so it would not interfere with its navigational purpose. According to prof. Schilder and Hans Kok "Compass roses have developed from impressing embellishments in the sixteenth century to almost austere renderings of navigational aid by the end of the eighteenth century. They may also have served as a commercial incentive and indicative of the chart makers' workshop and probably are to be considered as an early company logo.
However, the map currently helps to identify the chart maker or even the draughtsman, who produced the chart, as they remained typical in the sense over time and thus supply valuable information. Several of the compass-roses by Isaak de Graaf at the end of his life have a small, filled-in square grid box to the east point of the rose. An identical compass rose by Isaak de Graaf is illustrated in Sailing for the East, page 233, ill.13.7.