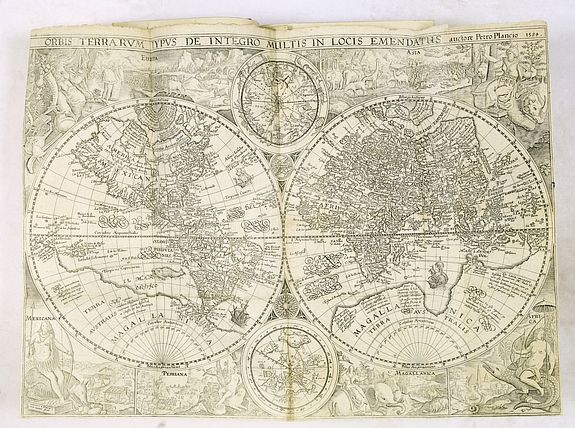 "This inestimable book, a treasure of all the learning respecting the East and West Indies and the navigations thither... [was held] in the highest esteem for nearly a century, and was given to each ship sailing to India, as a log-book [ie., sailing manual].
Hence the many editions, which is also the cause why fine copies, especially with all the plates and maps, are so very rare.
A large part of the book is occupied by translations of original Spanish and Portuguese documents on geography, ethnography, statistics, navigations, etc., and in these respects, it is of the highest importance and authority. The description of America occupies...the third part" 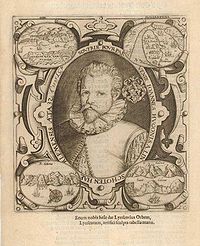 Jan Huygen van Linschoten (1563-1611) was a Dutchman, born in Haarlem in 1563. He had an "avaricious thirst for knowledge, which enabled him to get detailed information of land and sea as far afield as the Spice Islands and China" (Penrose). Linschoten traveled to Goa in 1583 as a clerk of the newly-appointed Portuguese Archbishop of Goa. He made a few trips into India, compiling notes on his experiences, gleaned information on sea routes from Portuguese sailors, and collected information from other sources as well. Linschoten left India in 1589, hired as a pepper factor for the Fugger and Welser interests, where he learned about the organization and administration of the spice trade.

Returning to his hometown of Enkhuizen in 1592 (after a two-year stay in the Azores), he prepared his notes for the Amsterdam publisher, Claeszoon, in response to interest in The Netherlands and other European countries about commercial possibilities in Asia. As trade in the Far East was dependent on routes via America or Africa, his work eventually encompassed the entire globe, including Spanish and Portuguese activities in America. Linschoten's practical experience lent authenticity to his work, and it remains one of the most important of all travel books.

Lach says that Linschoten's description of Goa is "one of the most original and reliable narratives prepared during the sixteenth century on life at the hub of Portugal's Eastern empire and still is regarded as one of the best sources for Goa's history at the peak of its glory... The original edition... contains a number of excellent maps, three of which are of great value for the study of Asia. These maps, which are much better and more detailed than earlier printed maps, were clearly derived from the latest and best Portuguese charts of the Eastern oceans and sea coats" - Lach.

Parry calls Linschoten's work "a journal of human adventure and observation, an uplifting story that appeals on many levels." "Fine copies of this work with all the maps and plates are extremely rare" - Church catalog.

A fine example of the French edition

A fine example of Linschoten's classic illustrated travelogue to the East and West Indies, termed by Lach - the most important of the first-hand accounts published independently of the great travel collections (I.198). No other book contained so much usable intelligence on the East and West Indies as Linschoten's.
Unhindered by the censorship that affected writers from the Iberian Peninsula, the author included such information as sailing directions, physical descriptions of countries, and statistics on commerce and trade.
The work was held in such high regard that for nearly a century, every Dutch ship headed for the East carried a copy of a Dutch edition of Linschoten.

This copy of the third French edition. The contemporary red Morrocco has been slightly restored, and internally rebound. The world map is likely supplied from another copy, as is one other page. The maps are in very good to mint condition, as is the overall condition of the book.

Although the work contains valuable reconnaissance for the New World (see below), the material on the East Indies is far and away from the most valuable, being the fruit of the author's own observation. In the service of the Portuguese, Linschoten spent five years in Goa (1583-88/9), making numerous visits to the mainland.
He was thoroughly immersed in Indian culture and the complex relations between the Portuguese colonial apparatus and indigenous peoples. Highlights include a first-hand description of the caste system, political structures, business practices of the Banyas, and exotic natural phenomena.

The first book treats the East Indies and East Africa, including regions as far east as Japan. The second book describes the navigation of the coasts of West Africa around the Cape of Good Hope to Arabia, together with the coasts of the New World, and includes a real roteiro after the Portuguese royal pilot Diego Affonso that sets out sailing directions from Portugal to India and from island to island in the East Indies. The third book is devoted to North America (Florida), the Caribbean, and Brazil.

The work was first published in Dutch in 1595/6. Latin and English translations followed in 1598. The first French edition appeared in 1610, but the plates are copies of the reduced version based on those in the De Bry; the second and third French editions return to the original, folio-sized plates of the Dutch edition and are accordingly the most desirable.