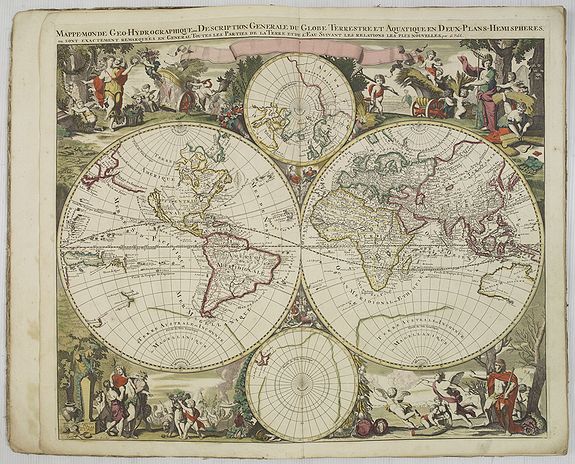 VALK, G. - Nova totius geographica telluris projectio. . . (Amsterdam, ca. 1711) Size of the book block : 54.0 x 33.0 cm. / 21.3 x 13.0 inches. The maps are in attractive strong original colours.
Folio, in contemp. red half-sheepskin binding. Atlas is composed of an allegorical title and 24 double-page maps in fine original coloring.
POR
This is the first atlas of Gerard Valk, publisher, engraver and manufacturer of globes in Amsterdam. The latter joined in 1673 Petrus Schenck for the publication of maps. In 1683, they acquired a part of the stock of Joan Blaeu, and founded in 1700 their own company. The association between the two families will continue until the middle of the 18th century. We did not locate a copy of this atlas as of 1706. The copies cited by Koeman and Phillips are not dated. Koeman also specifies that, according to the copies, the number of maps can vary between 25 and 100. No example at the British Library.

All maps are signed Valk, with the exception of eight maps (seven from Sanson and one from Schenck).
Our website uses cookies. By continuing, you consent to the use of cookies on your device, unless you have disabled them from your browser.