Dutchman and a Maruyama prostitute. 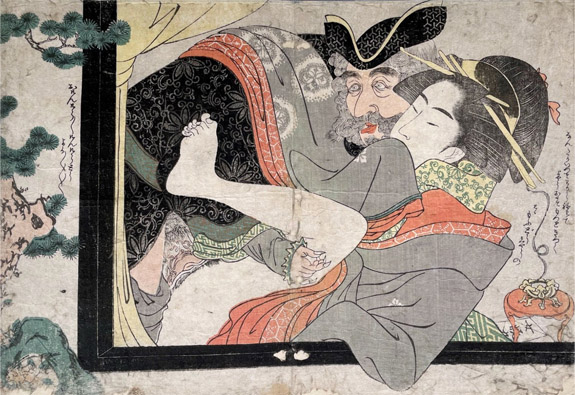 An explicit scene of a Dutchman and a Maruyama prostitute, featuring a gray-bearded westerner coupling with a courtesan.
The woman protests that she doesn't understand what the foreigner is saying, but demands that he "Push! Do it harder!.
The man, gripping her thigh, responds to her entreaties with a stream of gibberish, "Oken, kera, kera, kenkera tou yoka yoka yoka"

Behind him to the right an incense burner in the background has been interpreted to mean that the Dutchman had a rancid odor that needed to be covered up.

The pleasure quarter of Maruyama was itself a tightly controlled district within the larger tightly controlled world of Tokugawa Japan, presided over by the shogun, whose chief political goal, aside from remaining in power, was to prevent a recurrence of the civil war and disorder that had prevailed in Japan before the Tokugawa clan came to power. The first pleasure quarter in Japan is supposed to have been created early in the seventeenth century, when Toyotomi Hideyoshi, the most powerful of Japan's feudal lords, allowed a favored servitor to establish a brothel, known as Yanagimachi, or "Willow Town," not far from the shogun's palace. At the same time, largely through the influence of a kimono-clad troupe of female erotic dancers led by one Izumo no Okuni, a legendary figure of Japanese cultural history, Kabuki theater came into being along the banks of the Kamo River in Kyoto.
Eventually, in order to keep the temptations of the pleasure quarter distant from the capital itself, the district of brothels, teahouses, and The Inescapable Courtesy of Japan theaters were moved farther south, to what became the famed Shimabara pleasure quarter, which was, in turn, a model for the Maruyama pleasure quarter Nagasaki familiar to the Dutch, In 1661, a writer named Asai Ryoi gave the whole establishment the name by which it has been known ever since, ukiyo, or "floating world, the idea being that since life is transient and fleeting, it ought to be spent in refined hedonism.

That the Dutch were enthusiastic participants in this floating world, which was entirely absent from their native country, is well established. Evidence includes a Dutch-Japanese phrase book from about 1770, compiled for the owner of the Ebi-ya, an inn in Kyoto where the Dutch delegation stayed on its annual pilgrimage from Nagasaki to that city, seat of the shogunate.

Eight of the book's eighty short phrases have to do with hiring the services of women, as in this exchange:
Do you like that girl?
Yes, I like her a great deal.
Would you like me to make appropriate arrangements:
Yes, please do
Understood.

Dutch pleasure-seeking was itself a matter of some titillation for local people, who are depicted in any number of Japanese woodblock prints of the eighteenth and nineteenth centuries flocking to get a glimpse of the strange foreigners on one of their excursions to the Maruyama brothels.

The above print from the 1790s by the celebrated artist Chokosai Eisho depicts a Dutchman, recognizable by his black triangular hat and curly muttonchops and beard, with his penis well inserted into the vagina of a Maruyama courtesan.The inscription has the courtesan complaining that she doesn't understand a word of what the Dutchman is saying, even as she instructs him to "push-do it harder!"

Such scenes, whether accurately depicted or not, were repeated over the next two hundred years as the Dutch maintained their Japanese trading monopoly.