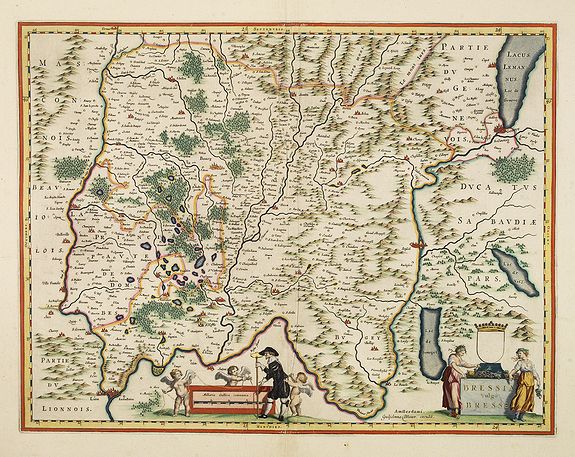 Printed maps, either by woodblock, copper- or steel engraving were usually bound into an atlas, and a larger number was sold black and white.
A substantial number however was colored by hand, and a very small number even heightened with gold or silver. As many atlases produced during the 16th - 17th century were produced for rich merchants, noblemen, and collectors, many of these atlases were colored for a decorative reason.
The fact that colors make the map more readable was best understood in the 18th century. Mapmakers like Homann, Seutter, Schenk, Valck, Covens and Mortier, offered their atlases almost exclusively colored.
Typically the countries are colored in full-body color, and cartouches left uncolored. Map-makers have long known that four colors (green, yellow, orange, and pink) are sufficient to color a map.
We see that the fashion of coloring maps was following the changing style of engraving. The early Lafreri type maps are usually not colored. But starting with the maps of Ortelius, Mercator and the Jode the maps have a border color with wash color for the regions.
During the early 17th century, typically the borderlines are in bold colors, also the cartouches have lesser color use and are boldly applied. (J.Hondius, Plancius, C.J.Visscher, Speed).
The copper engraving became finer, as the maps became more detailed and the cartouches more profane, the coloring became more delicate and finer.

Various materials were used as size to prevent the paper from absorbing the color too rapidly or unevenly, white of egg being the most common.
Judging from books on the subject, some colorists went to great lengths to obtain the correct color, the constituents coming from all over the world and taking several days to prepare.
These colors are generally remarkably good, retaining their brilliance and showing little sign of fading since they were applied.
The greens can cause some trouble: they were made from verdigris which in time rots through the paper to the extent of disintegration.

Detecting old versus new coloring.
From the color pigments applied on colored maps, usually, the green shows oxidation on the back. Renaissance colorists made the green color using Sulfuric acid or Copper in the form of verdigris mixed with wax was used to make the green color.
Oxidation refers to the chemical changes that a substance undergoes when it is exposed to the elements. The color change that results from copper's oxidation tends to be a darkening to a deeper brown or rust color. In the first place, the paper will darken, afterward the color itself. Oxidation leads to the corrosion and corruption of the paper. In most cases, the oxidation on the verso is visible to the eye. When thick and very good paper quality was used oxidation is not always visible on the verso.

The most commonly used lighting tool to detect oxidation is a long-wave ultraviolet lamp in the 365-nanometer range. At this wavelength, many materials absorb invisible ultraviolet energy and transform this energy to visible colored light, easily distinguished by the human eye. The test can be done in a dark area or room by holding the UV lamp to the verso of the map. Typically the area that has green applied will be absorbed without emission, making these areas appear quite dark in contrast to the fluorescent areas.
Certain pigments also have signature fluorescences: -madder or alizarin red show pink in UV, for instance, a zinc white (which has been used since the nineteenth century appears yellow. Iron gall ink, a common brown writing and drawing ink used from medieval times through the 19th century, when faded from visibility, remains detectable under ultraviolet light.
Ultraviolet (UV) light causes the old paper to fluoresces faintly whitish, yellowish, or grayish, but modern paper glows bright bluish-white. Mildew (foxing) appears yellowish and makes water stains easy to recognize. Old vellum appears yellowish-white or ivory, but modern vellum appears bluish-white.
During World War II, airplanes used maps written in UV fluorescent ink. During dangerous battle situations, the navigator could read the map without illuminating the cockpit.

Colour pigments used are :
Azurite
A greenish-blue pigment named after the Persian word "lazhward" meaning "blue", it is chemically close to the green colorant malachite. Azurite was known from ancient times and became extremely popular during the Middle Ages and Renaissance era, as Egyptian Blue declined. Used in oil painting, it performed best as a water-based pigment and was often employed in Tempera paint under an oil glaze. Superseded by Prussian blue in the early 18th century, and rendered obsolete after the synthesisation of Ultramarine and the development of Cobalt Blue.

Copper Resinate
Known since the mid-Byzantine era (c.800 CE), this is a transparent jade-green glaze made by dissolving copper salts in Venice turpentine. It was used particularly by Post-Renaissance 16th-century Italian oil painters, to color foliage. It was commonly combined with azurite paint, and layered over lead white or lead-tin yellow pigments.

Lac
A red colorant originally made in India, which gave rise to the term "Lake", meaning any transparent dye-based color precipitated on an inert pigment base, used for glazing. During the High Renaissance in Italy, Lac was the third most expensive pigment (after gold and Ultramarine), but most artists thought it worth the expense. Lapis Lazuli (Ultramarine) The source of the fabulous, absolutely permanent, and non-toxic natural blue pigment Ultramarine, the precious stone Lapis Lazuli is found in Central Asia, notably Afghanistan. It was employed in ancient times as a simple ground-up mineral (Lapis Lazuli or Lazuline Blue) with weak color power. Then Persian craftsmen discovered a means of extracting the coloring agent, creating at a stroke a hugely important art material. Ultramarine arrived in Venice on Arab boats, during the Renaissance, and was named the pigment from overseas ("ultra marine"). Such was its brilliance that it rapidly attained a price that only princes and large wealthy religious organizations could afford it. Although strongly associated with Renaissance art, it is still widely used by contemporary painters, especially since prices and supply have improved. Synthetic Ultramarine is chemically identical, although typically appears in a more reddish shade. However, it's far lower price will no doubt ensure that genuine Ultramarine remains in limited usage.

Lead-Tin Yellow
A highly stable bright opaque yellow was used from around 1250 until the mid-17th century when its use ceased abruptly for no obvious reason. Experts believe that its formula might have been lost due to the death of its producer. Very popular with Renaissance painters, who used it in foliage along with earth pigments, Lead-Tin Yellow seems to have many of the attributes of modern Cadmium Yellow, but little was known about it until the 1940s. Since then it has enjoyed a modest recovery.

Madder
A natural plant colorant obtained from Madder plants in a process dating back to Antiquity. It was brought back to Europe during the time of the Crusades. It was one of the most stable natural pigments. Dyes derived from the root of the Madder plant were used in ancient Egypt for coloring textiles. Later natural madder pigments were used by 15th and 16th-century painters. After a synthetic version was invented in 1868 by the German chemists, Grabe and Lieberman, natural production virtually ceased.

Ultramarine
Natural Ultramarine, made from the precious stone Lapis Lazuli, was (and remains) one of the world's most expensive artists' pigments. A cool deep blue hue, it was first used in 6th century Afghanistan, and the pigment achieved its zenith during the Italian Renaissance as it harmonized perfectly with the vermilion and gold of illuminated manuscripts and Italian panel painting. However, being vulnerable to even minute traces of mineral acids and acid vapours, it was only used for frescoes when it was applied "secco" (when the pigment was mixed with a binding medium and applied over dry plaster) as in Giotto di Bondone's famous fresco cycle in the Cappella degli Scrovegni Chapel in Padua. Ultramarine was finally synthesized independently by both the Frenchman Jean Baptiste Guimet and the German chemist Christian Gottlob Gmelin in the late 1820s/ early-1830s. The artificial colorant was non-toxic and as permanent as the natural variety but darker and less azure. It was formulated for both oil and watercolor paints.

Verdigris
A common synthetic green pigment used from Classical Antiquity until the 19th century, it was the most vibrant green available during the Renaissance and Baroque eras. Its relative transparency led to it being frequently combined with lead white or lead-tin yellow, or used as a glaze. The name derives from the Old French word "vertegrez", meaning "green of Greece". Its use declined sharply from the 18th century onwards.

Vermilion (Vermillion)
An orange-ish red pigment with fine hiding power and good permanence, but high toxicity. Natural Vermilion, known to the Romans as Minium, comes from the mineral ore Cinnabar (see above), and the name Vermilion is most commonly used to describe the synthetic version of the pigment, which nowadays is usually obtained by reacting mercury with molten sulfur. In Antiquity, Vermilion/Cinnabar was highly prized, being ten times more expensive than red ochre. Later it was an important colorant in illuminated manuscripts, although it remained prohibitively expensive until the 14th century when a synthetic version was first produced. Vermilion was the traditional red pigment in Chinese art and is the colorant used in Chinese red lacquer. Today, Vermilion has been replaced in a painting by the pigment cadmium red.

16th-century full coloring, typically Ortelius, De Jode. Note the sister of Ortelius, Anna, seems to be a well-known map colorist. Also, Ortelius has colored maps himself in his early days.