Although tulips are often associated with the Netherlands, commercial cultivation of the flower began in the Ottoman Empire. Tulips, or lale, (from Persian, lâleh) as they are also called in Iran and Turkey, comprise many species that together are indigenous to a vast area encompassing parts of Asia, Europe and north Africa. The word tulip, which earlier appeared in English in forms such as tulipa or tulipant, entered the language by way of French tulipe and its obsolete form tulipan or by way of Modern Latin tulipa, from Ottoman Turkish tülbend ("muslin" or "gauze"), and is ultimately derived from Persian dulband ("turban").

Although it is unknown who first brought the tulip to Northwestern Europe, the most widely accepted story is that it was Oghier Ghislain de Busbecq, an ambassador for Ferdinand I of Germany, to Suleyman the Magnificent of the Ottoman Empire. He remarked in a letter that he saw "an abundance of flowers everywhere; Narcissus, hyacinths and those in Turkish called Lale, much to our astonishment because it was almost midwinter, a season "unfriendly to flowers."
However, in 1559, an account by Conrad Gessner described tulips flowering in Augsburg, Bavaria in the garden of Councillor Herwart. Due to the nature of the tulip's growing cycle, tulip bulbs are generally removed from the ground in June and must be replanted by September to endure the winter. While possible, it is doubtful that Busbecq could successfully have had the tulip bulbs harvested, shipped to Germany, and replanted between his first sighting of them in March 1558 and Gessner's description the following year. As a result, Busbecq's account of the supposed first sighting of tulips by a European is possibly spurious.

Carolus Clusius planted tulips at the Imperial Botanical Gardens of Vienna in 1573, and later at the Leiden University's newly established Hortus Botanicus, where he was appointed director. There he planted some of his tulip bulbs in late 1593. As a result, 1594 is considered the official date of the tulip's first flowering in the Netherlands, despite reports of the flowers being cultivated in private gardens in Antwerp and Amsterdam two or three decades earlier. These tulips at Leiden would eventually lead to both Tulip mania and the commercial tulip industry in Holland.

Introduction to the United States.
It is believed the first tulips in the United States were grown near Spring Pond at the Fay Estate in Lynn and Salem, Massachusetts. From 1847 to 1865, a historic land owner named Richard Sullivan Fay, Esq., one of Lynn's wealthiest men, would settle on 500 acres (2.0 km2) located partly in present-day Lynn and partly in present-day Salem. While there, Mr. Fay imported many different trees and plants from all parts of the world and planted them among the meadows of the Fay Estate.

Variegated varieties admired during the Dutch tulipomania gained their delicately feathered patterns from an infection with the tulip breaking virus, a mosaic virus that was carried by the green peach aphid, Myzus persicae. These aphids were common in European gardens of the seventeenth century. While the virus produces fantastically colorful flowers, it also causes weakened plants prone to decline.

Tulip mania.
Tulip mania or tulipomania was a period in the Dutch Golden Age during which contract prices for bulbs of the recently introduced tulip reached extraordinarily high levels and then suddenly collapsed. At the peak of tulip mania, in February 1637, some single tulip bulbs sold for more than 10 times the annual income of a skilled craftsman. It is generally considered the first recorded speculative bubble (or economic bubble). The term "tulip mania" is now often used metaphorically to refer to any large economic bubble.
Read more about Speculative bubbles - The First financial cricis. 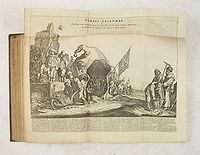 Floraes Gecks-Kap.
"Floraes Geks-kap Afbeeldinge van't wonderlijcke Jaar van 1637 doen d'eene Geck d'ander uytbroeyde, de luy Rijck sonder goet, en wijs sonder verstant waeren".
Satire on the tulip mania showing a fools' cap used as a tent. Inside the fools' cap people are sitting around tables with scales, with an inscription above their heads 'De Comparitje', a flag hangs from the tent with two fools on it and an inscription underneath 'Inde 2 Sotte Bollen', on the right of the tent a woman named 'Flora' rides a donkey and an angry crowd is following her. In the foreground, people carry tulips and flower bulbs. Underneath the print text in Dutch and French.

DUTCH SCHOOL. - Cultivar of the garden tulip. The Netherlands c.1700. 246 x 85mm. Watercolour with bodycolour on laid paper.
Very detailed and well executed tulip drawing by an unknown artist and a follower of the School of Anthony Claesz (1607/8-1649).

This drawing was made for a 'Tulip book' painted just after 'Tulipomania' rampaged through Holland. These florilegia were commissioned to allow buyers of bulbs to discern differences between varieties. The beauty of these works ensured that their images would be copied for decades to come by amateur painters and gardeners alike.
Anthony Claesz is a Dutch master in his own right, with several highly accomplished works to his name. As with most of the great Dutch masters of this period, they were happy to earn a little more money by painting such books. It also allowed them to study in detail subjects that would later be incorporated in their great flower pieces.
This and the other three drawings are particularly decorative and elaborate examples and are apparently by the same hand as two examples sold at a New York auction in January 2011 and one other example in the PJ Morgan Library & Museum.
Our website uses cookies. By continuing, you consent to the use of cookies on your device, unless you have disabled them from your browser.