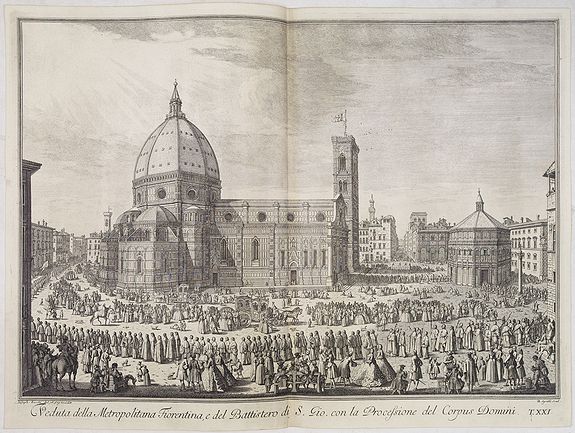 The son of a sand-digger from Fiesole, Zocchi " was apprenticed to that important figure of the Florentine Baroque, Ranieri del Pace. On the latter's death (in 1738), it was Gabburri who offered his support, as did the wealthy Marchese Andrea Gerini. Zocchi very probably studied perspective, which he enriched with trips to Rome, Bologna and to the North of Italy.
He was awarded the prize for young students in the painting class at the Accademia in 1737, and in 1741 was admitted to the first year. Between 1739 and 1741, he must also have traveled to Venice, where he was Joseph Wagner's student and where he learned the art of engraving.

Gabburri had encouraged him in this field by having him draw the paintings of various artists in the churches in Florence to be used as the basis for engravings. It must be emphasized, however, that although Zocchi is primarily known in the modern age as a draughtsman and view painter, he was in his own time pre-eminently a figure painter, even in his architectural and landscape works.
Proof of this lies in Gabburri's own words when he mentions how Zocchi would pass from landscape painting "after having painted figures in oil, and architecture a fresco and in tempera" "Zocchi's most famous work is his two-fold series of engravings published in 1744, promoted and paid for by the Marchese Gerini, entitled Selection of XXIV Views of the principal Districts, Squares, Churches, and Palaces of the City of Florence and of Views of Villas and of Places in Tuscany, made after Zocchi's own drawings.
The complete set of drawings (probably the set owned by Zocchi's patron, Gerini) consisting of seventy-seven sheets, is now in the Pierpont Morgan Library in New York" (Roberto Contini for the Museo Thyssen-Bornemisza)


His work "Scelta de XXIV vedute delle principali contrade, piazza, chiese, e palazzo dell citta di Firenze " is a "selection" of 24 engraved double-page views of Florence by engraved by Corsi, Franceschini, Gabuggiani, Gregori, Papini, Muller, Marieschi, Monaco, Pazzi Pfeffel, Seuter, Sgrilli, Vasi and others after Zocchi and produced by the press of the Florentine printer Giuseppe Allegrini, which were commissioned and financed by the Marquis Andrea Gerini, and dedicated to Maria Teresa of Austria.
The series, which was designed to "set before the eyes of curious observers, especially foreign, the noblest and charming views", had such success that it very soon became a prototype for other similar editorial initiatives, undertaken in Rome, Venice and other European cities.

The original plates of the "Scelta di XXIV Vedute" immediately underwent two further printings in Florence, by Giuseppe Bouchard, in 1754 and in 1757. A posthumous edition was also printed by Giuseppe Zocchi's brother Cosimo, again in Florence, around 1770. From then on, up to the late nineteenth century, there were innumerable further editions, with rare variations.