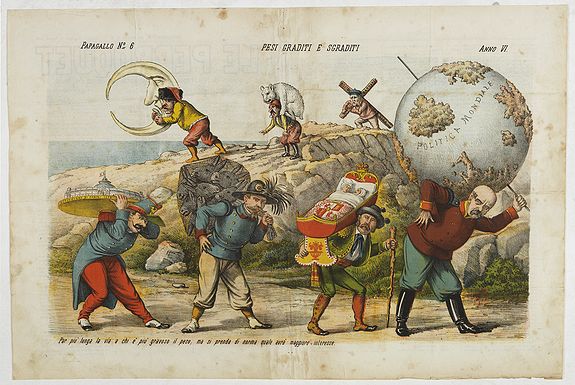 The art of caricature has been ever-present in the pages of general histories as an illustration of popular feelings towards events or particular personalities. As a subject of the formation of public opinion, rather than its descriptive or illustrative function, the theme of caricature, and political caricature in particular is still relatively new despite the fact that it has attracted growing interest in recent years.
The Italian satirical newspaper "Il Papagallo" was founded in 1873 by Augusto Grossi, the lithographer and caricaturist, and ex-chief designer for "La Rana", another satirical newspaper from Bologna.

Augusto Grossi (1835-1919) specialized in color-printed caricatures. At its peak, the circulation of "Il Papagallo" reached 50,000, and in 1878 a Parisian version, "Le Perroquet", and a London edition, "The Parrot", were both launched - even a Greek version exists.
"Il Papagallo" closed in 1915, when Grossi was 70 years old.

The international obsession of the newspaper was so successful, that some observers of the time testify to the presence of his drawings in cafes and restaurants in many European countries, with even local imitations being more or less successful.
By systematically evoking international tensions through national stereotypes at a time when diplomatic issues are worrying and passionate.