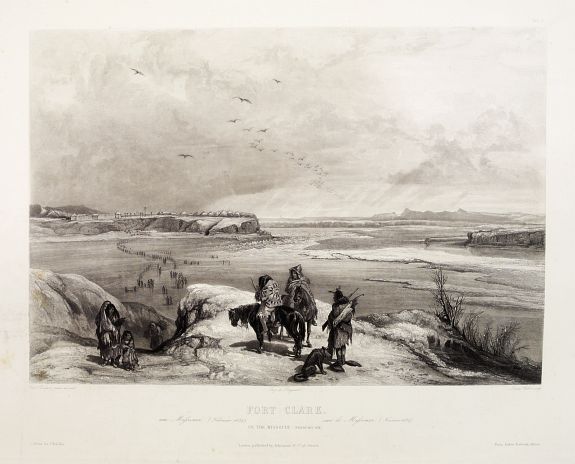 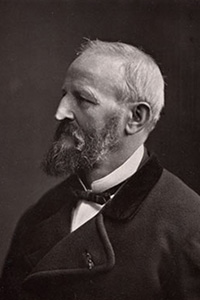 Karl Bodmer, the painter of perhaps the finest of all Plains Indian portraits, was born on February 11, 1809, in Zurich, Switzerland, where he received artistic training from his uncle, landscape painter and engraver Johann Jakob Meyer.

In 1832 naturalist and explorer Prince Maximilian of Wied-Neuwied contracted Bodmer's services for an expedition to North America. Their journey lasted from July 1832 to July 1834, but the most important phase began in April 1833, when they set out on a voyage up the Missouri River by steamship and, later, keelboat. During stops at trading posts and encampments, Bodmer composed watercolor portraits of Omaha, Dakota, Assiniboine, Atsina, Mandan, Hidatsa, and Blackfeet chiefs and warriors but occasionally women and children as well. He also painted village scenes, ceremonies, and a wide variety of landscapes. In August 1833 Maximilian and Bodmer reached Fort McKenzie, near present-day Great Falls, Montana, but, faced with menacing warfare among the Blackfeet, they turned back a month later. Spending the harsh winter of 1833–34 in Fort Clark near present-day Bismarck, North Dakota, the two central Europeans established a warm rapport with the Mandans and Hidatsas. Artistically and scientifically, their stay at Fort Clark was the most fruitful part of their journey. The masterful–and ethnographically accurate– watercolor, Interior of a Mandan Earth Lodge, for example, was sketched over a period of several months during their time at Fort Clark.

After their return to Europe, Bodmer worked for a decade preparing a deluxe edition of Prince Maximilian's Travels in the Interior of North America, first published in German in 1839 but promptly translated into French and English and illustrated with eighty-one hand-colored aquatints based on Bodmer's watercolors. Maximilian's narrative has long been one of the most important sources for western history and ethnography, while Bodmer's aquatints provided some of the most striking and well-known images of Plains Indians. The work, however, sold poorly, and Bodmer later rued his involvement as an irretrievable loss for his career.

In the 1850s Bodmer settled outside Paris, a.liating himself with the Barbizon school of landscape painters. Over the next decades, he achieved a creditable reputation as a painter of forest scenes, and his engravings regularly appeared in French illustrated magazines. Now and then Bodmer may have nostalgically recalled his American adventures, but for him, the United States was only an episode in a career focused on wholly different interests. Bodmer spent his last years in dire poverty, estranged from his family, and he died in relative obscurity in Paris on October 30, 1893.

After Maximilian's death, the prince's diaries and notebooks and Bodmer's nearly 400 original watercolors and sketches vanished into the Wied family archives and were only rediscovered after World War II. In 1962 the Northern Natural Gas Company of Omaha, Nebraska, purchased this collection, which its successor, the Enron Corporation, donated to the Joslyn Art Museum in 1986, where it had been on permanent loan.

Karl Bodmer was a consummate landscape artist who captured often-haunting images of Missouri River scenery and the vast prairies. However, it is the Indian portraits for which he is most remembered. Despite his lack of previous training in portraiture, Bodmer captured the physiognomies, ornamentation, and attire of Native Americans with exceptional detail and accuracy, and in his works his subjects display the vitality one associates with the finest portraiture. Less well known than his flamboyant contemporary, George Catlin, Bodmer nevertheless was a far superior artist.
See also EUROPEAN AMERICANS: Maximilian, Prince of Wied-Neuwied.
William J. Orr Foreign Service of the United States
Bodmer, Karl. Karl Bodmer's America. Lincoln: University of Nebraska Press, 1984.
Thomas, Davis, and Karin Ronnefeldt. People of the First Man: Life among the Plains Indians in Their Final Days of Glory. New York: E. P. Dutton, 1976.

MAXIMILIAN, PRINCE OF WIED-NEUWIED (1782-1867)
Prince Maximilian Alexander Philipp of Wied-Neuwied was a German explorer and naturalist who traveled through the United States in 1832–1834. He became well known for his studies of the Northern Plains Indians, especially the Mandans and Hidatsas.

Prince Maximilian was born the eighth of eleven children on September 23, 1782, in the city of Neuwied, Germany. His parents were Friedrich Carl Count of Wied-Neuwied (1741–1809) and Louise Wilhelmine Countess of Sayn-Wittgenstein-Berleburg (1747–1823). The most influential people in Maximilian's career were Johann Friedrich Blumenbach, the Enlightenment's leading theorist on comparative anthropology, and naturalist Alexander von Humboldt, who became his mentor and friend after they met in Paris in 1814.

Whenever Prince Maximilian was free of military service in the Prussian army, he diligently pursued his scientific studies. He learned his skills as a naturalist mainly on his own, but he also enrolled at the University of Göttingen in 1811–12 to study under Blumenbach. In 1815, encouraged by Humboldt, Maximilian led his first major expedition to Brazil, where he studied the flora and fauna of the Mata Atlantica and Indigenous peoples such as the Botocudo, Purí, and Pataxo. Upon returning to Germany in 1817, Maximilian devoted himself to the analysis of his Brazilian experience, which culminated in the two-volume Journey to Brazil in the Years 1815–17 (1820–21).

In the late 1820s, Maximilian began preparations for a second major expedition. Originally he played with the idea of exploring Labrador or the Kirgisian Steppe in Russia, but by 1830 he had decided to travel to North America. One stated purpose of this journey was to continue his investigation of the flora and fauna of the Americas, but he also intended to study the Indigenous cultures of North America and compare them with those of southeastern Brazil.
In May of 1832 Maximilian, accompanied by the Swiss painter Karl Bodmer, left Europe for the United States, where they arrived in early July. After a tour of eastern cities, they traveled west. Because of a serious illness resembling cholera, Maximilian was forced to stay the winter of 1832–33 in New Harmony, Indiana, where he enjoyed the company of fellow naturalists Thomas Say and Charles Alexandre Lesueur.

In the spring of 1833 Maximilian finally arrived in St. Louis, where he made arrangements to travel up the Missouri river with boats belonging to the American Fur Company. After short stops at Forts Pierre, Clark, and Union, Maximilian arrived at Fort McKenzie, the westernmost point of his expedition, in August of 1833.
Originally Maximilian wanted to extend his studies farther upriver into the Rocky Mountains, but the hostility of the three Blackfeet tribes forced him to reconsider this plan. After about five weeks of fieldwork around Fort McKenzie, Maximilian returned to Fort Clark to stay for the winter of 1833–34. There he devoted his time to a thorough study of the Mandans and Hidatsas and to a less complete analysis of the nearby Arikaras.

In his travel accounts, Maximilian routinely described the physical appearance of the Indigenous peoples he encountered, then concentrated on recording their customs, languages, and cultures, including one of the most important ceremonies of the Mandans, the Okipa.
Maximilian's visit to the upper Missouri came at a time when the fur trade was altering the social, political, and cultural characteristics of the Northern Plains tribes, and he recorded many of these changes, even though he was not always aware of their significance. His travel writings also reinforced the Romantic interest in the "noble savage," an invented image that had fascinated intellectuals throughout Europe since the late Renaissance.

In April of 1834, the Prince journeyed back to the East Coast, then on to Europe in July. As soon as he returned to Neuwied, Maximilian began the synthesis of his expedition, which culminated in the publication of the two-volume Travels in the Interior of North America (1839–41). In the years following, and until a few years before his death on February 3, 1867, in Neuwied, he continued to publish articles on his North American experience. Maximilian's legacy survives in the nomenclature of Plains plants and animals (for example, the sunflower Helianthus maximilianii and the Cretaceous saurian Mosasaurus maximiliani).