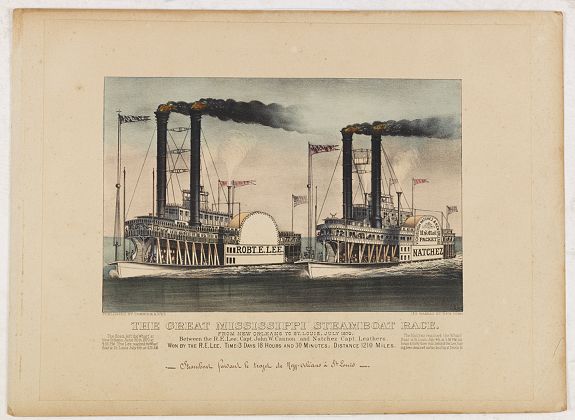 Currier & Ives was a New York publishing firm that produced and sold thousands of impressions of more than 7,000 different lithographic prints during the latter half of the nineteenth century. One of the most prolific printmaking concerns of its time, the firm originated with Nathaniel Currier (1813-1888) whose shop issued its first lithographs in 1835.
In 1852 Nathaniel Currier was joined by his brother-in-law, James Merritt Ives (1824-1895). The firm operated until 1907."

Images include genre scenes, illustrations of progressive technology, American nationalism, historical scenes and even leisure activities.
Most Currier & Ives prints are hand colored lithographs, although Currier & Ives did issue several uncolored prints and a number of chromolithographs due to the high cost this process was short-lived and are sought after by collectors.

The firm was unique in its capability to unite artistic talent, skilled craftsmanship, appropriate expertise and merchandising shrewdness into a winning business venture. Under employment or contract were renowned artists of the day including Maurer Palmer, Tait and Worth were just a few who were in employment at different times. The Artistic awareness to detail is apparent in the work, on examination of the clipper ship print or a country scene will confirm the absolute quality of the prints. Only the premium materials were used: stones from Bavaria (where lithography was invented), lithographic crayons from France, and colors from Austria.
The firm contributed to technology by inventing a lithographic crayon, reputed to be superior to any other available at the time. It also fashioned a lithographic in which contained beef suet, goose grease, white wax, castile soap, gum mastic, shellac and gas black. Ground-breaking merchandising techniques were used.
Mass circulation and low cost were the keys to success. Cost was essential. Uncolored prints sold for as little as 20 cents each and ever large-colored folios sold for no then three dollars. Prints were sold door-to-door by peddlers, in the streets by pushcart vendors, in geographically remote places through distributors, and even overseas through agents.